VIDEO: The 33-year-old Master's degree holder who hawks for a living 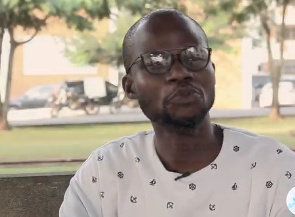 The commonly practised sequence in our society is that, once someone is able to complete tertiary education, they are expected to land a 'decent' job, mostly, a white collar job.

It is very "uncommon", one would say, in our part of the world to see people like 33-year-old Sedem Dsane, who has a Master's degree, hawking for a lliving.

With two bags filled with a variety of home-made pastries and drinks, Sedem walks down the halls of the University of Ghana calling out the names of baked products (meat pie, spring rolls, pancakes, samosa) he has made, ready for sale.

Sedem tells us how his father's death, although painful, made his baking business come alive. “The demise of my dad was a trigger. It was then I decided to go all out," he said.

"It all begun two days after my birthday, that is when my dad died. He said he was going to give me my birthday gift. He gave me some amount of money. So when he died, I said no, this money must be to his honour. In life when these things happen, you rather see a bigger picture," he explained.

Sedem appeared to as though had always wanted this one life of mixing flour and butter and the thrill of serving mouth-watering baked meals.

For a Masters Degree holder, you would think his satisfaction would ultimately lie in a career "befitting" the status quo, but Sedem remains unmoved. He recounts a frequent encounter where people have looked down on him simply for being a pastry guy down the hall.

"For people who do this business, it is assumed that they have not gone to go. When people got to know that Oh this guy is in GIMPA, they would be like oh they are sorry they did not know. One time there was this level hundred girl, she said she wanted to buy pie and at the time I was even on phone and then she shouted, "Hey guy, I am buying a pie, didn't you hear me!" I was a little provoked. Later when she got to know, later when she saw me she said oh i am sorry for the other time," he narrated.

But of course, Sedem has won for himself students on campus who will do anything to see him thrive in his small business. His interaction with customers is beyond amazing.

Sedem is in no way oblivious of the gift and power of human interaction.

Sedem is convinced if there’s one thing he has done so well without regret, it is choosing to take this vocational path and finally coming to terms with the wealth of his skills and the reward that lies in putting to good use one own’s gift.

Unlike Sedem who has been able to fully utilize his skills of baking in creating a sustainable source of income, the same cannot be said of thousands of graduates who are actively seeking job opportunities.

Experts have over the years advised a revision of the country's educational curricula suggesting the introduction of skills development as part of the courses of study.

"Our school system have proven not to be working for the country. It has only succeeded in producing functional illiterates because the system causes students to acquire knowledge that they cannot relate with outside the classroom. We have to change the syllabus, change the way students are taught and even how the exam itself is conducted," - Anis Haffar (Founder, Gifted and Talented Education (GATE) Institute).

This they believe will churn out a generation of formally educated persons who can also survive outside the confines of a corporate environment, just like Sedem.

What remains the future of a nation tragically limited by the lack of respect for vocational and technical training?

Sedem has a Bachelor’s Degree in Nutrition and a Master’s in Social Science. He could be working with the Food and Drugs Authority or consulting as a nutritionist expert. Instead, Sedem made a choice to be out of the office, a choice to be self-employed, a choice to work with flour, a choice he made with his mind and heart to use his hands, not to be dependent on a white collar job. A choice very rare in our times.

As Confucius said- Choose a job you love, and you will never have to work a day in your life. There’s no doubt Sedem has found the key to living a life of service and fulfillment, regardless of the obstacles in his way.