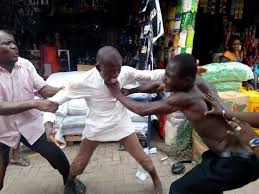 There was a state of pandemonium in a market in the Ashanti Regional capital, Kumasi as two self styled evangelists were seen fighting for space to preach.

The pastors who were very "passionate" about preaching the word of God to the market women and passerbys  begun exchanging words after one of the pastors overtook the other to mount his equipment at the exact spot the other pastor preaches.

Angered by the overtaking, the second pastor who was late to work could not fathom why his brother in Christ would "steal" his shine.

The two then began jabbing eachother which resulted in hot exchange of blows.

In a video available to Ghanaguardian.com, the two pastors who dragged the fight to the centre of the market were managed to be separated by some men in the market.

Watch the fight in the video below: