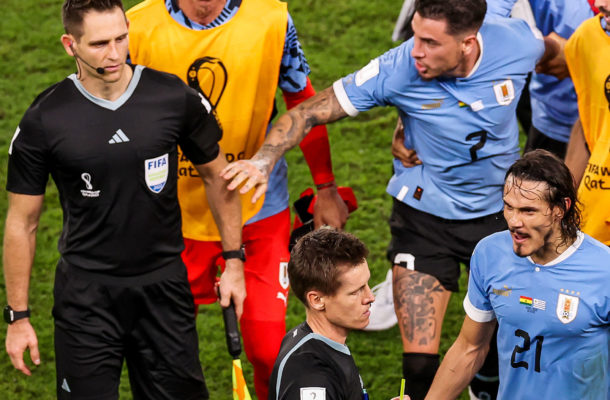 Uruguayan striker  Edinson  Cavani sent his pent-up frustration on the Video Assistant Referee monitor after the final whistle in their 2-0 win over Ghana on Friday.

The South  Americans were cruising into the round of 16 before South  Korea scored a late winner against Portugal to oust Uruguay.

Cavani wanted a penalty after a tangle in  the penalty box with Ghana's right back Alidu Seidu  but nothing was given despite the incessant protestation.

Uruguay beat Ghana but went out of the World Cup on goals scored as they finished third behind South Korea in Group H, despite Luiz Suarez's heroics.

The Uruguay striker played a major role in both of Uruguay's goals and the 35-year-old was in tears after the final whistle, following what may have been his last international.

Both goals were scored by Giorgio de Arrascaeta, the first a close-range header, the second a sublime volley.

Uruguay's players reacted furiously at full-time, confronting the referee and appearing to manhandle an assistant after they failed to award a penalty to Darwin Nunez after a coming together with Alidu Seidu.

The Valencia striker among other players may be handed a lengthy ban from FIFA for their action. VIDEO BELOW: