VIDEO: Watch all goals and highlights of Ghana's 3-2 win over Korea 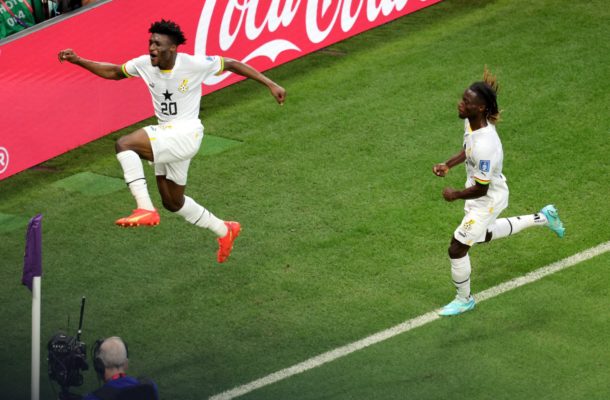 The Black  Stars of Ghana shot into a two-goal lead in the first half of their second game against Korea but had to fight hard in the second half for all three points as the Asian giants leveled after recess.

Korea lost 2-3 to Ghana in the second leg of Group H of the 2022 FIFA World Cup Qatar held at the Education City Stadium in Al Rayyan, Qatar.

The Asian side secured possession in the early stages of the match and pushed Ghana with countless attacks  and many corner kicks which were repelled by Ghana defense.

Ghana scored the first goal in the 24th minute of the first half as Jordan Ayew's right-footed free kick was headed toward the goal, and Kim Min-jae tried to kick the ball with his head, but it was not completely cleared.

In the end, the confusion continued, and Mohammad Salisu slotted home with his left foot, after the ball brushed off Andre Ayew.

Mohamed Kudus scored Ghana's second goal as he deftly touched home the second goal with the back of his head from a Jordan Ayew cross from the left flank to make it 2-0 as Korea faced a crisis of desperation.

At the start of the second half, coach Bento put in Na Sang-ho to try to turn the atmosphere around. However, Ghana's defense stood still but ultimately conceded twice in two minutes to two identical goals from Cho-Gue Sung.

Two stunning headers in three minutes from Cho Gue-sung, the top scorer in his domestic league, levelled the game after 61 minutes.

But the impressive Kudus, who had deftly headed in Jordan Ayew's cross in the first half, added a final twist when he thumped in a third for Ghana to break South Korea's hearts.

Chances continued to fall South Korea's way as they searched for another equaliser but, despite 10 minutes of added time, Ghana held on.

Ghana goalkeeper Lawrence Ati Zigi made several saves in the closing minutes as South Korea poured forward but to no avail.

With Portugal to come next for South Korea, this feels a significant defeat, while Ghana - unfortunate to lose against Portugal - will face Uruguay in good spirits in their final game. VIDEO BELOW: