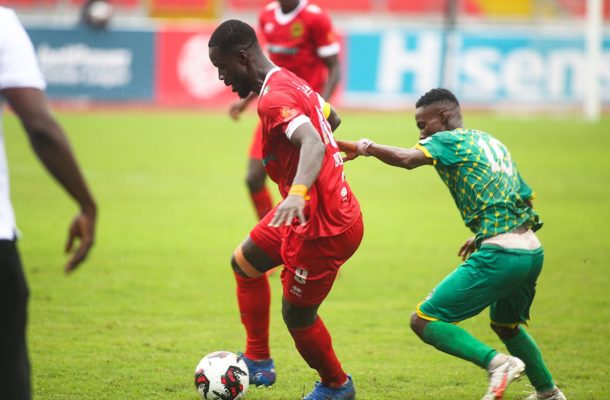 The reds were dumped out of the CAF Champions League preliminary stage after losing to RC Kadiogo last week  before enduring a heartbreaking 1-1  draw with fierce rivals Hearts of Oak in their first league game.

Kotoko started the game on the front foot and on the 12th minute were awarded a penalty as the 'born-again' Stepehen  Amankona was shoved in the penalty box.

The former Berekum Chelsea winger stepped up and converted into the bottom corner for his first competitive goal for Kotoko since joining last season.

Mubarik  Yussif sustained an injury and was replaced by Andres Appau but the away side briefly threatened the Kotoko defense but they were thwarted.

The porcupines should have increased the tally but it appears Ugandan striker Steven Dese Mukwala left his shooting boots in his homeland as he made a hash of one on one chances among others.

Meanwhile, Serge Zeze was unplayable as he run the show from midfield with his nice touches and incisive passes and was rightly named man of the match.

But after recess, Mukwala supplied the assist for Isaac Oppong to make it 2-0 for the reds in the 46th minute of the game.

Phillip Ofori headed the visitors right back into the game in the 57th minute from a corner kick to make it 2-1 as the match was on a knife edge.

The league champions held on as they defeated Nsoatreman FC their first defeat of the season in the betPawa Premier League.