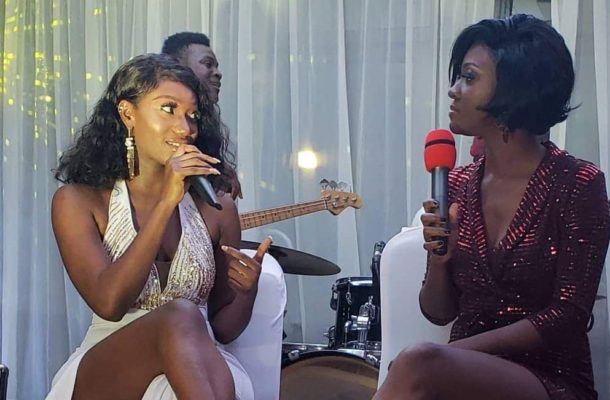 Ruff Town Record’s signee, Wendy Shay, has finally given an answer to a question she described as 'dumb'.

The budding Afro-pop singer was under heavy criticisms early last month after what started as a normal interview with her ended under frosty circumstances when JoyNews’ MzGee posed the question “Who is Wendy Shay?”

The question by MzGee was a follow up to Wendy Shay’s call that “Ghanaians should accept her for who Wendy Shay is” during the interview.

However, Wendy Shay who got peeved after the question was asked descibed it as dumb and called for the interview to end.

The 22-year-old who has songs like Uber Driver, Bedroom Commando and recently Astalavista doing the magic for her on Thursday, December 20, 2018, had a private launch for her maiden album, Shay On You at the Golden Tulip Hotel in Accra.

The Uber Driver hitmaker who is on a steady rise was asked the infamous question again by Radio/TV personality, Caroline Sampson who was the host of the programme.

the songstress revealed that the “Shay on You” is a 10 track album. She added that the album was recorded in six months and includes highlife, afrobeat, dancehall, and other music genres.

Songs on the “Shay On you” album she said include Psalm 35, Uber Driver, Shay On you and many others.