VIDEO: Who is Fella Makafui? Is she a bird? – Efia Odo sarcastically asks 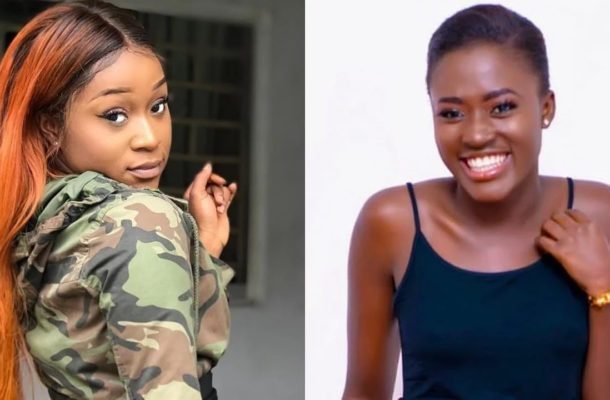 Efia Odo who was asked about her relationship with Fella Makafui immediately denied knowing her.

“Who is that? I don’t know who that is. I’ve never heard of her. Is that like a bird or something?” she asked in response to a question on the relationship between them.

Efia Odo, however, admitted later on that she apologised to Fella Makafui for humiliating her on social media.

She stressed that she only apologised for the humiliation and not the series of allegations against the ‘YOLO’ actress.

“I don’t like fakeness…So I addressed the situation publicly. She did something I didn’t like and that was that. I speak my mind and I go my way…I wasn’t apologizing for what I said but I apologized for humiliating her in public,” she said.

Efia Odo is reported to have alleged that the ‘YOLO’ actress sleeps with film producers for movie roles.

The two have been 'beefing' for a while now after Efia Odo accused Fella of sleeping with big men for favours in return.

Their beef trended for days seem to have surfaced with Efia’s latest comment which is clearly directed at Fella and has stirred another controversy on social media.

Efia Odo made several damning allegations against her colleague actress, Fela on snapchat.

According to Efia, the YOLO star sleeps with politicians and “big men” for money, cars and other luxuries she is currently enjoying yet makes it seems she’s working so hard for all she has acquired in the shortest time in her career.

In several video posted on her snapchat, the actress alleges that her colleague actress does not know her worth and therefore give her body to the men for luxury.