VIDEOS: Student points a gun at his teacher and forces her to change his grades 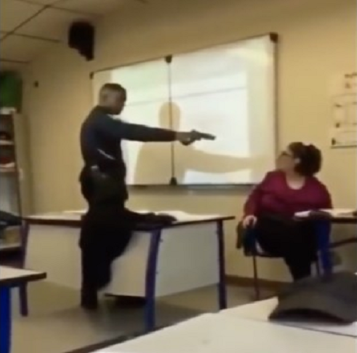 A high school student was caught on video threatening his teacher with a gun to change his poor grade and give him a passing grade.

In a video of the incident, which occurred in a school in Brazil, the boy is seen standing beside a female teacher, with a gun pointed at her.

There were other boys in the class giving him support. One was filming and can be heard offering words of encouragement in the background.

Another was seen making faces in front of the camera as their mate held their teacher at gunpoint.

Speaking Portuguese, the student is heard telling his teacher to "change his grade" while his mates laughed.

The video was shared online and immediately went viral, prompting police to take action and go in search of the teenager.

The boy is currently on the run.