VIDEOS: Watch goals scored by Brazil against Ghana in friendly 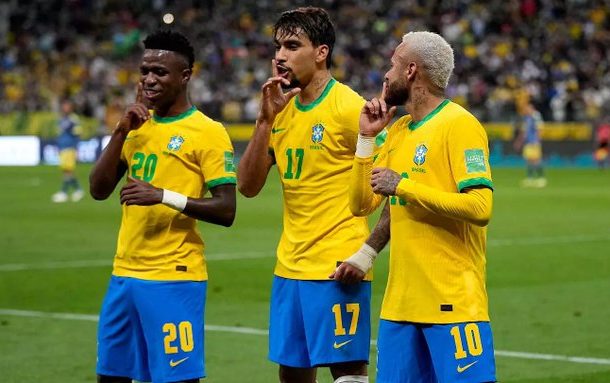 The Black Stars of Ghana endured a torrid first half against the selecao of Brazil on Friday night in Le Havre as they were handed a rude awakening in a passive display in the first  45  minutes.

Brazil could have scored more than the three goals they had in the first half as Richarlison and Vinicius Junior wasted chances that came their way.

Marquinhos headed home a corner kick from Raphina in the 9th minute before a well-worked team effort was curled home from outside the box by Richarlison in the 28th minute with a pass from Neymar.

The Tottenham forward completed his brace in the 40th minute to make it 3-0 after connecting with a free kick from Neymar after a foul on Neymar from Andre Ayew.

Brazil could have scored more goals as they wasted numerous chances to end the contest.

After recess, Ghana switched to a back three as Salisu Mohammed and Inaki Willimas came into the game and they changed the game completely.

Inaki Williams had an attempt on goal charged down by Bremer which earned Ghana a corner kick.

Ghana controlled the game for much of the second period and nearly scored as Andre Ayew headed a corner against the post.

A quick counter-attack from Ghana was destined for goal but it hit the back of Inaki Williams before evading Andre Ayew.

Rodrygo sent a fierce shot goalwards and Andres Cunha pounced on the rebound but Salisu Mohammed saved the situation for a corner kick.

It ended with Brazil winning 3-0 as Ghana will comfort themselves with an improved second half prformance.

They will play against Nicaragua in four days time in Spain.