A man proposed to his girlfriend by hiding the ring "in his penis" and people are confused.

The woman only discovered the ring after the man asked her to perform oral sex on him and she obliged.

The story was shared on a Facebook group named, "That's It. I'm Wedding Shaming". Someone posted a screenshot of a woman’s engagement announcement, which, alongside a photo of her ring, read:

Last night he asked me to blow him.

I put my hands on his cock and this is what I pulled out. He is truly a blessing in my life. I wouldn’t ask for anything else. 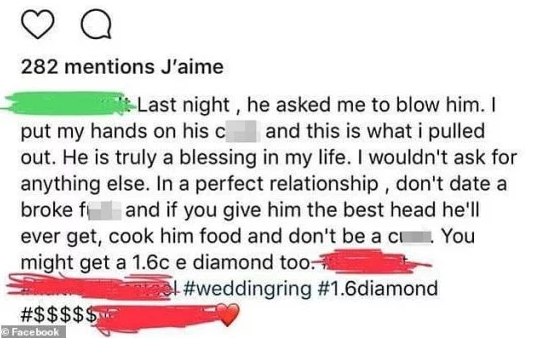 Research shows that this post was first shared on Instagram in 2015 but is just now going viral after it was shared on the Facebook group named above. The caption on the original Instagram post has now been changed to a simple "Je t’aime".

The couple (who foreign websites refused to name out of respect for their privacy) have since got married and are living a very happy life together.

But their story is just now going viral and social media users are responding with wonderment and they have a lot of questions.

"I’m really confused. Is he uncut with a foreskin the size of Canada that he fit a ring inside? Did he put the ring around his penis? I MUST KNOW," wrote one commenter. ‘

Another comment reads: "Where was it? If it was ON his body, then this is going to be a very unsatisfying marriage. If it was IN his body, I’d get that ring cleaned before taking photos."

One commenter wrote: "OK I saw this before and I was confused like where was it? In his hole? But now as I was scrolling by and saw it again I realized she probably touched his penis through his pants and felt it? And unzipped his pants and found the ring box?

She said pulled OUT, not OFF. So I’ll take it that in the process of getting his under clothes off, she felt the ring and pulled it out."

As the story kept trending, Metro UK got in touch with the woman asking for explanations. She explains that the ring was not inside his penis as implied, but was instead in a box inside his underwear.

We actually got married in Las Vegas four years ago and got cheap rings.

When we got back to Montreal I had no clue he already had a gorgeous diamond ring.

He put in his boxers in a box and made a joke and said: wanna blow me? so as i put my hand on his penis I felt the box and laughed so hard cause I didn’t even know he got me that gorgeous ring. Obviously after that we got down to business.

[It was] in a box in his boxers.
The woman, who’d prefer to remain anonymous, was asked if she finds it strange that people are talking about her proposal years later and she responds: "hahahahaha yes".