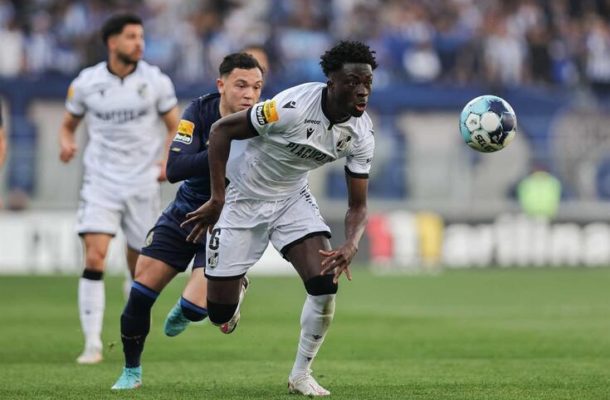 Portuguese side Vitoria Guimaraes are ready to cash in on in demand Ghanaian center back Abdul Mumin despite the apparent departure of  Toni Borevkovic.

The club needs to raise funds this summer and the Ghanaian defender is among their most valuable assets.

Ghana and Vitoria Guimaraes defender Abdul Mumin is attracting a lot of interest from clubs in Europe ahead of the summer transfer window.

The defender has been a shining light for his side in the Portuguese Primiera Liga this campaign.

He has been linked with a potential move to clubs such as Lille, AS Monaco in France as his performance has caugt the eye of  most clubs in  Europe.

Latest to join the long queue of suitors for the center back is Turkish giants Fenerbahce who are looking for reinforcement at the back in the summer.

The 23 year old former FC Nordsjaelland center back has played 29 matches across all competitions this season for his club helping to keep six clean sheets.

He joined his Portuguese club two seasons ago as a free agent from  Danish side FC Nordsjaelland.

Abdul Mumin will be the subject of a transfer tug of war in the summer which his club is bracing themselves for offers.

He was called up in March this year for the Black Stars for the 2022 World Cup play offs but is yet to make his debut.

Mumin is now with the Black Stars in Japan for the Kirin Cup.