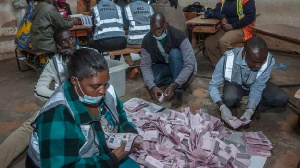 Votes are being counted in Malawi following a re-run of last year's election on Tuesday.

Polling was largely peaceful, although President Peter Mutharika accused the opposition of acts of violence in its strongholds in the centre of the country.

His narrow victory in 2019's poll was annulled in February after judges ruled that there had been evidence of vote tampering.

The incumbent is facing a strong challenge from an opposition coalition led by Lazarus Chakwera.

The results may not be declared for several days.