Vote for me; don’t even let one vote elude me – Mahama begs delegates 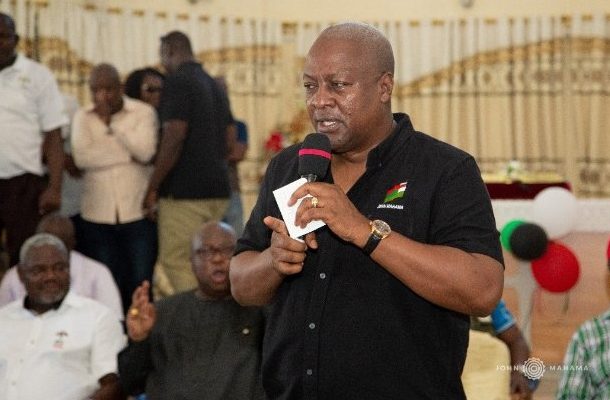 Former President and flagbearer hopeful, John Dramani Mahama has urged branch and constituency executives of the NDC at Asante Mampong Constituency to vote him as flagbearer of the party come December 7.

According to him, every vote counts and for that matter the executives should not let any vote elude him.

Speaking to the executives and party faithful, the former president mentioned that Ghanaians would want to know the number of people who voted for him in flagbearership race.

“I have come to show myself to you even though some of you know me whilst others don’t but I would plead with you with all humility that on the day of election, do not let one vote elude me.”

He believes that would send a strong signal to the citizenry across the country and convince them of him being the obvious choice as well as his relevance to the development of Ghana.

Even though the executives’ sense of empathy was besought, the former President sounded confident of massive victory on December 7.

He assured the people of Mampong of development if voted as flagbearer and subsequently President of the Republic of Ghana.

The former President also mentioned that during his time, he brought some water projects to Mampong since that was one of their major challenge.

The President, Nana Addo Dankwa Akuffo Addo, in recent times admittedly noted the hard economic conditions and government’s efforts in solving the situation.
However, his predecessor took a jab at him saying the President found his way onto the throne through lies and gargantuan promises that have not been achieved.