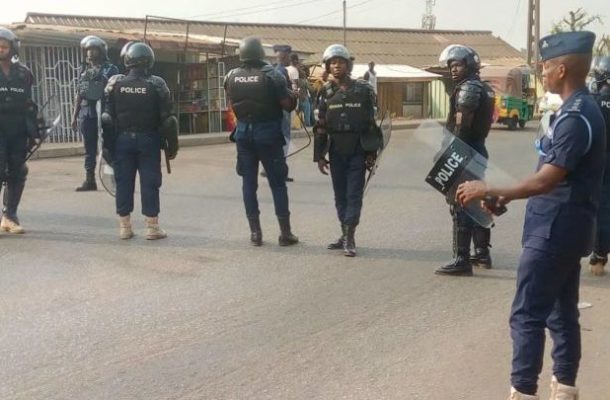 Some people believed to be supporters of the National Democratic Congress on Monday besieged the Kasoa Police Command despite heavy police presence at the station.

This comes after four people hour were arrested, with some guns retrieved by the Kasoa Divisional Police Command.

They have since been transferred to the Regional Police Headquarters in Cape Coast in the the Central Regional Capital for investigations to continue.

Divisional Police Commander, Chief Superintendent Charles Ampem Koosonu revealed his outfit acted immediately the incident happened and upon swift patrols in and around Kasoa environs arrested a pickup where they arrested this suspects.

Speaking on Starr Today, NDC communications officer Mr Delali Sewarkpor accused the Special Initiatives Minister, Mavis Hawa Koomson of being behind the violence in the area.

According to him, several complaints to the Kasoa divisional police command has been ignored with no arrest made.

Mr. Sewakpor added that NPP thugs have on different occasions attacked members of the NDC and in some instance serious injuries have been inflicted on their party members with no action taken by the Police.

Mr. Sewakpor added that NDC supporters who besieged the Police station earlier in the day have left.

Currently, the registration centre has been closed down as the Electoral Commission officers at the venue have fled following the violence.