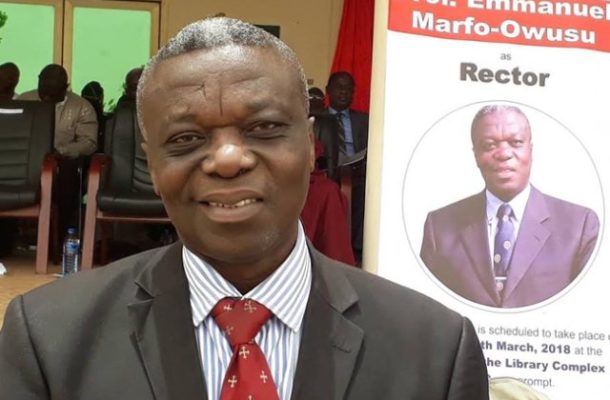 There is likely to be a showdown at the campus of the Wa Polytechnic as the embattled Rector has vowed to return to the campus in defiance of workers protests and an interdiction order.

On Monday aggrieved staff of the Polytechnic chased out Professor Emmanuel Marfo Owusu after mounting road blocks to impound his car and prevent him from accessing his office.

The angry lecturers chased Prof. Marfo-Owusu out of campus with clubs and stones on Monday.

The Wa Polytechnic chapter of the Polytechnic Teachers Association of Ghana (POTAG), has leveled a series of allegations of financial malfeasance and breaches of procurement processes against Prof Marfo-Owusu.

Prof Marfo-Owusu has been accused by the lecturers of breaching procurement regulations in the purchase of a Mercedez Benz vehicle worth about Gh₵500,000.

Professor Marfo Owusu has filed a fresh suit to halt his interdiction and a probe into allegations of embezzling over 500,000 Cedis.

He told Starr News that he and his Lawyers are returning to the court to sue the Polytechnic authorities for contempt.

“I will be there, they can touch me if they want. I want to sue the one who will be brave enough to touch me.

“I am going there tomorrow morning with the Police because I am expected to be there to take care of the school in respect to signing the cheques for the school. I am not there for the lecturers.

“If I leave them to do their own the whole coffers will be empty,” the Rector stated in an interview.

Police officers have been deployed to the Polytechnic to restore calm.

The Polytechnic Council also convened an emergency meeting over the impasse Monday evening.