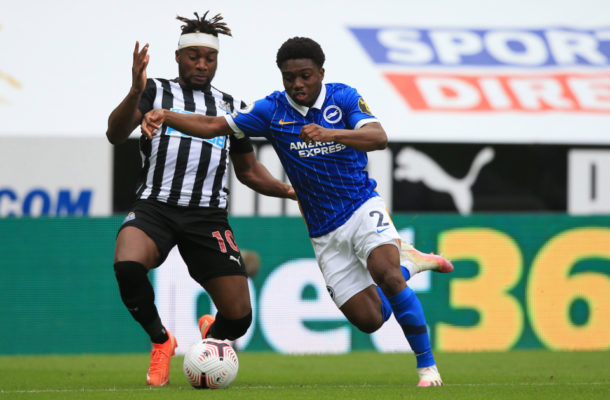 Brighton's French striker Neal Maupay has been singing the praises of teammate Tariq Lamptey after his impressive outings this season in the English Premier League.

The 19 year old right full back has been in incredible form for Brighton first taking Chelsea's Marcos Alonso to the cleaners in their opening day game against Chelsea as he went past him on countless occasions with his pace and trickery.

He continued from where he left off against Chelsea with an emphatic display against Newcastle at the St James’ Park where Brighton won by 3-0.

Lamptey set up the first goal for Brighton after he was felled in the box by Newcastle winger Alain Saint Maximin with Neal Maupay stepping up to score the penalty for the opener.

The French striker said: “Tariq is amazing. He’s been with us only six months now maybe, and he’s been on top every single day, and he’s such a good guy too. Everyone loves him in the team and every time he’s on the pitch, he gives everything he has.

“He’s so quick, he’s got great quality on the ball too, he’s a good defender. We are all grateful to have him in the team.”


Maupay had doubled Brighton’s tally with just seven minutes played and Lamptey watched from the bench as Aaron Connolly completed a comprehensive victory seven minutes from time despite Yves Bissouma’s late dismissal for a high challenge on Lewis.