We are not weak in bed, potbelly men are just jealous – Macho man fires 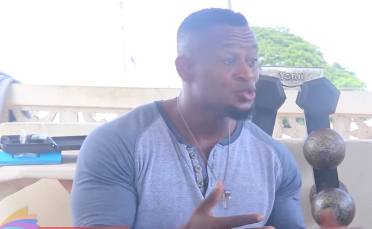 Bodybuilder by name Oliver Rockson Prempeh, speaking to DJ Nyaami, on SVTV Africa, has challenged the assertion that muscular men are weak in bed.
For some time now, bodybuilders, have been in the news after claims that their performance in bed is below par.

This perception about men in the bodybuilding circle, particularly Ghana, doesn’t seem to go well with them, hence with the little opportunity they get to counter, they either get mad or laugh at it.

Mr. Prempeh, speaking on SVTV Africa, on this assertion, challenged it, daring every Ghanaian with such perception, to prove with facts.

According to him, muscular men are neither weak in sex nor as poor as perceived.

The former liberty professional player, citing himself as an example, said, muscular men are totally different from the aforementioned perception.

"If your boyfriend is not good in bed, just say that. Don’t come and say we are weak in bed. If you are not confident in yourself don’t sit there and say muscular men are poor," he narrated.

The Arnold Gold Classic Winner revealed that, as a bodybuilder, he was able to organize a peaceful election campaign prior to the 2016 election.

Adding that, through bodybuilding, he has been able to put the nation Ghana, on the globe.