We are voting for John Mahama – Aggrieved Menzgold customers assure 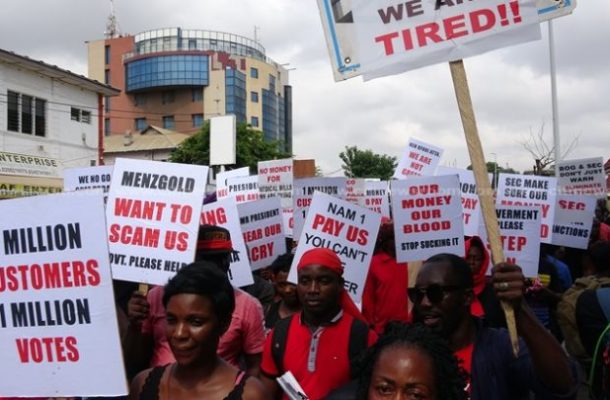 Some aggrieved customers of the defiant gold dealership company, Menzgold have promised to vote massively for former President John Mahama if he can reassure them he will settle all their locked up funds when he wins power.

The fact is that thousands of Ghanaians have their investments locked up with the ‘ponzi scheme’ firm for over two years now which is so worrisome and noone seems to resolving it.

However, former president Mahama has promised to pay customers within a  year of all the financial institutions who cannot access their locked up funds for some time now if he recapture power.

Some of the aggrieved customers have promised to reward him with their votes if he can fulfil his promises.

MyNewsGH reported that “The comment from the flagbearer JDM is very reassuring, but we want him to be more specific with Menzgold that when I come within one year, I will make sure that all Menzgold customers receive their investments”, one customer said on an Accra-based radio station.

He added “that is what we want to hear from him [Mahama] publicly so that the customers will not have any doubt in him. So, we can also go all out and sell his message to our people.”

Another customer said “the comment from, I think is feasible and he has been in government before so he knows the pros and cons and all that in government.  For him to promise that I think is possible.”

“I think is possible. It tells me he is a thinking president because he thinks about other people. If you a leader, you hold the door for others to enter before you close”, added.

Some customers of the beleaguered gold dealership firm, Menzgold have died out of shock and pain since their monies got locked up.