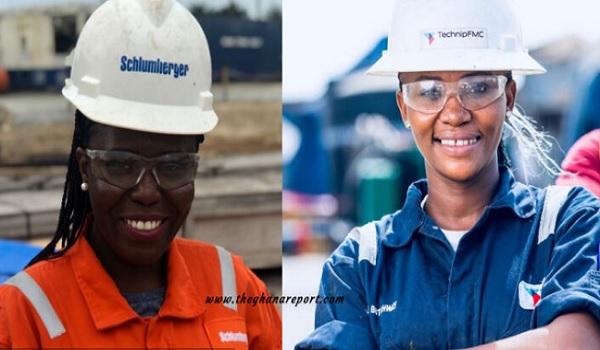 In the bid to encourage more females into the engineering field and the oil and gas industry, The Ghana Report sat with two outstanding female engineers who are blazing the path in the predominantly male-dominated industry.


The two, both in their 30s are charting the path in the oil and gas industry.

Rebecca rose through the ranks since she joined Schlumberger some 11 years ago, she now serves as the maintenance supervisor, responsible for West African countries except Nigeria.

“As the maintenance supervisor, I am responsible for the on-time delivery of equipment as par operational demands and improving the reliability, efficiency of the equipment, and I am in charge of all West African countries except Nigeria,” she said.


Women in the oil and gas industry normally opt for the ‘soft’ jobs like Human Resources, Public Relation/Corporate Affairs and these female engineers confirmed it.

“When you come to Schlumberger, there are women here, but not as much as men they are the ones in the Administration, Human Resources department..but I think the company is trying to recruit more women, the issue is most of the time the women themselves are not coming forward.

“The company does not have a policy geared at recruiting women, but there is a conscious effort to fill in more women,” she said. 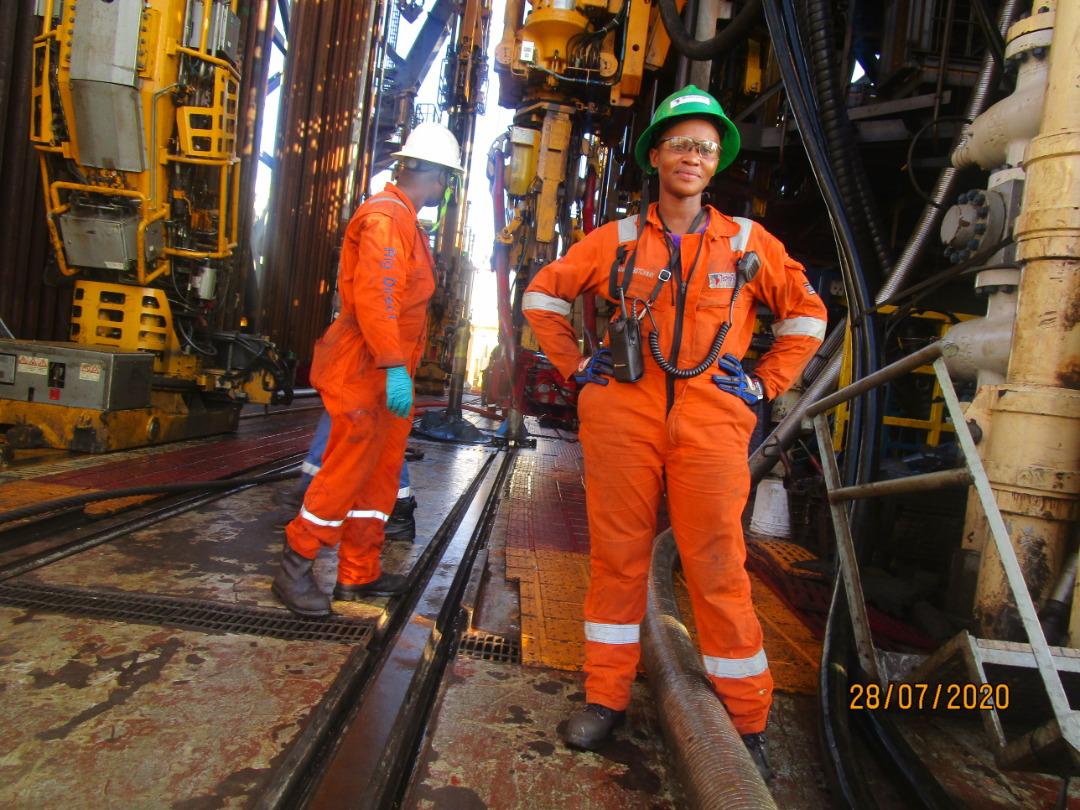 On her part, Gizelle recounted how the panel that interviewed her for the job were sceptical of her capabilities

“They thought I could not do the job so I was put to test and I performed and that made me the first female engineer to join FMC technologies,” she said.

Explaining why she chose a career in a male-dominated industry, Rebecca said, during her  secondary school days at the Ghana Secondary School, she noticed she did better with the science courses 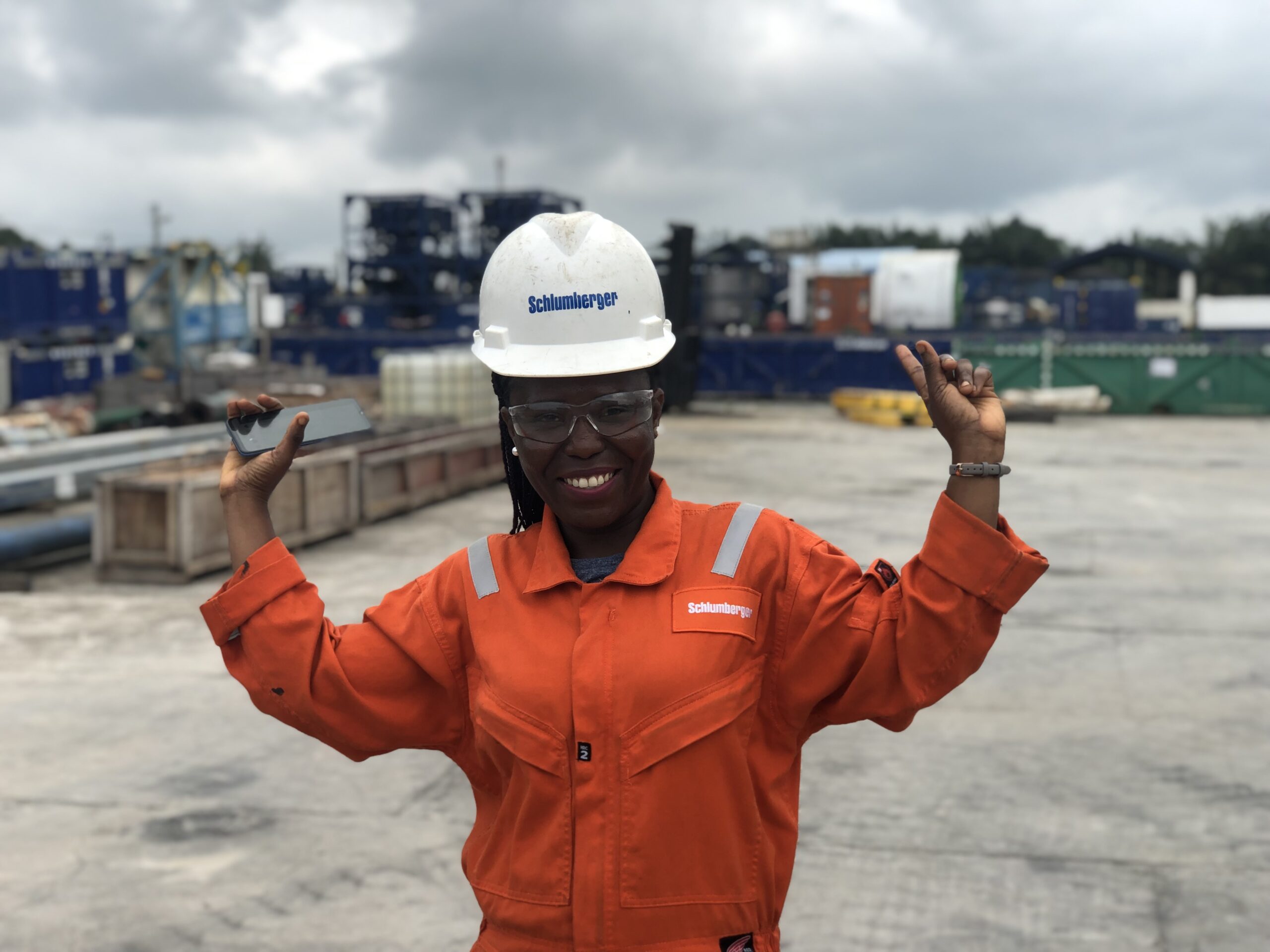 “I can’t absorb abstract things for too long, I like to be physical with things and that reflected in my performance in science courses in school”.

The 38-year-old enrolled at the Cape Coast Polytechnic to pursue electrical and electronic engineering and later mastered at the Ghana Telcom University.

On her part, Gizelle said, she was the ‘tech girl’ in her house

” Growing up, I wanted to know how everything electronic in the house worked, I remember opening up our television set or wireless tape each time it was faulty trying to fix them” she noted.


Gizelle pursed HND electrical engineering at the Takoradi Technical University then later to the Ghana Telcom University for a degree in Telecom engineering.

After school, she gained employment with Intertek Ghana where she was in charge of the calibration of pressure gauges for oil and gas companies.

“So in 2014, I heard FMC Technologies now Technip FMC  was hiring technicians in the workshop so I applied and I got called for the interview and the first question I was asked was (you are a female can you do this job), I said yes.” 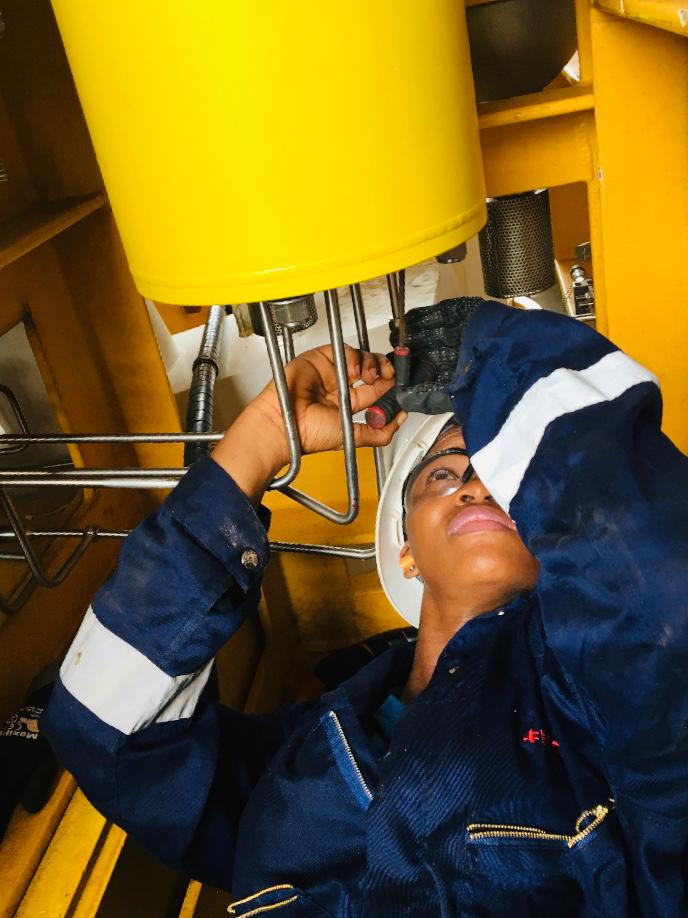 “…he looked at me and said (no you can’t do it) I insisted and to test my capabilities he put me on the spot to mark the floor for some painting work” she recounted.

Sharing her challenges as a young female engineer, Rebecca recollected how she was denied her promotion.

“I recollect in my early days how my former manager sabotaged my promotion…he kept telling me somebody at the top was delaying it. Meanwhile, he was the one doing it and my male counterparts got their promotion and  went ahead of me”


“…so one day while sending files to his replacement (because he was transferred) he mistakenly sent them to me and that’s how I found out” she cringed as she narrated the episode.

Ms. Botchway shared her experience “I was transferred from the workshop to join the services side and that requires you to work 28-days without rest then get 28-days off work.”

“As a girl sometimes you want to be a girl especially when you’re on your 28th day but I can’t be a girl.”

In addition to the structural challenges these women say they face, there is also the outward under-estimation from their male colleagues.

Even at the workplace, they are seen as less intelligent and incapable of work.

Gizelle shares one of such experiences, “In my early days at Technip FMC, I  was put on a man lift with a male colleague.”

“I feel you will slow my work down,” she recalled her male colleague’s words, as he admonished her not to choose him as a work colleague when asked.

“But as I speak to you now, it is a different situation, now he sees me and he knows there’s no more to me, he respects me now,” she said smiling. 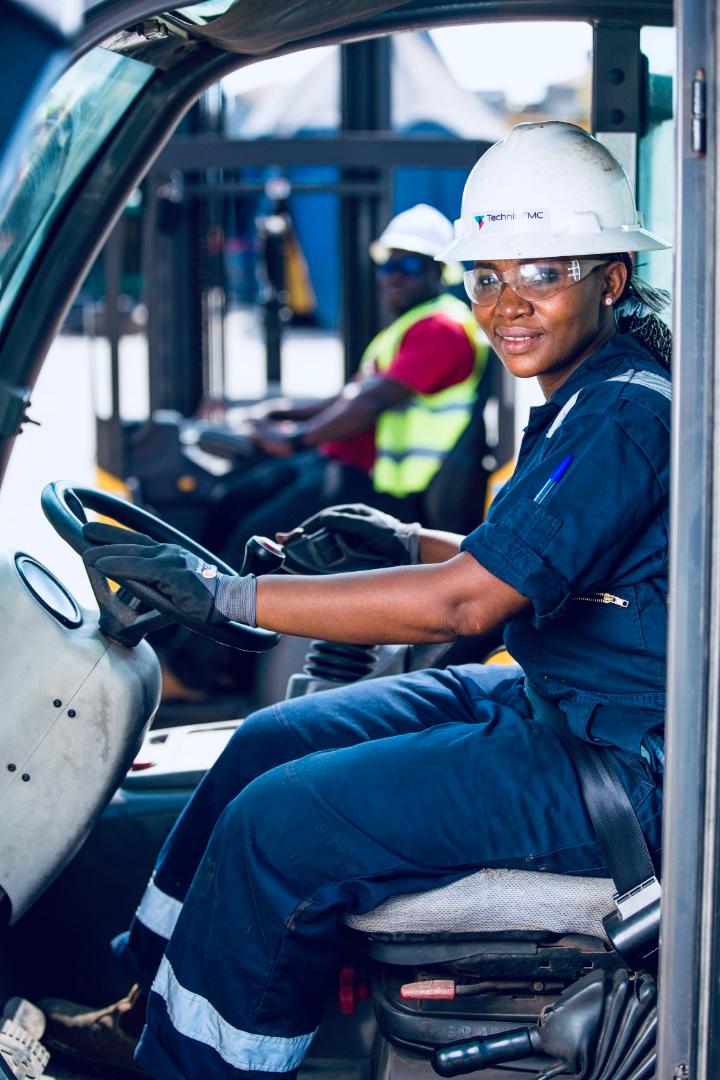 Rebecca recounted her own experience; she says it was frustrating. She is in the ‘well service’ that prepares the machines for off-shore work.

Her routine is to prepare the equipment on-shore, but whenever an opportunity came to go to sea, she was picked over men.

“….when there is a job they will call him…this is when I, the trainee, has done all the [preparatory work]. They will tell me it’s a high profile job and call him to come and sail and they will not have any issue”

“So, I raised the objection that if I am that bad why is it that when I prepare [the equipment], he will go and [use it without any problem],” she said, adding that “it was because I was a female.”

The two agreed that the underestimation sparked a desire in them to prove a point.

“At a point, we need that intimidation to bring out the best in us, I always worked extra hard to prove a point,” Gizzelle said.

Rebecca agrees, according to her, the irritation of being underrated pushed her to set standards for herself. “I leave a mark with every project work on” she noted.

“At a certain point, I got offended by the underestimation, even now as a maintenance supervisor…”

“With some people once [an instruction] is coming from a woman they don’t want to take it. There was one guy, he refused to listen to me and that costed the company and he was dismissed…” she said.

Ghana’s oil and gas industry is predominantly men, therefore, the few females who land jobs in there are faced with a lot of condescending perceptions.

“People think women in the oil and gas industry are promiscuous, they think we are arrogant and bossy because of our money,” Gizelle said.

According to her, that perception has had a toll on her relationships, adding that some male colleagues also think the same of their female counterparts. 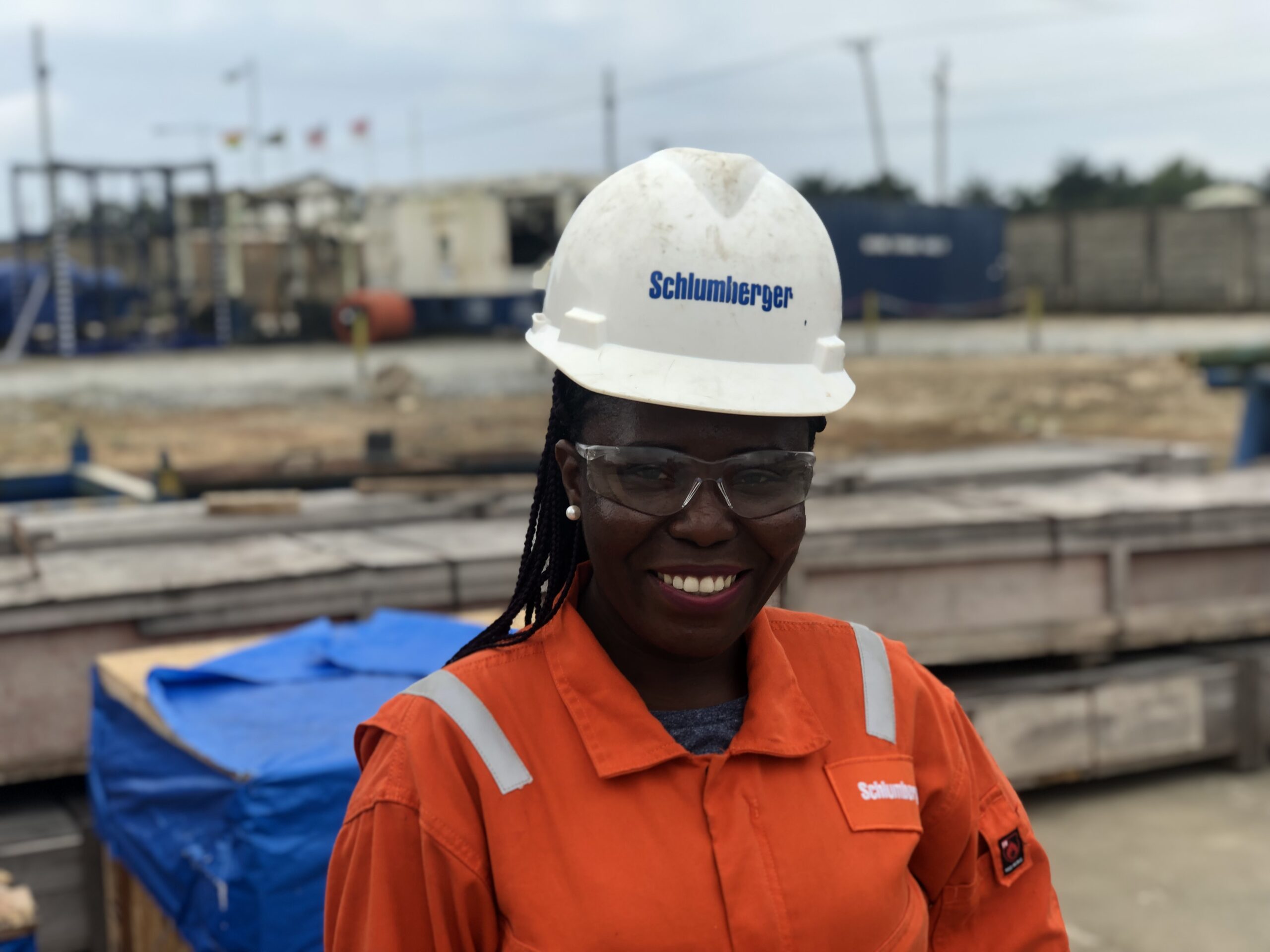 “They play the sexual advances card with you to test your standards” she noted.

“People think female engineers cannot be married, raise a family…but I know one who has been married for close to 15years…” Rebecca noted.

Primetime Limited, an education-interest advertising and public relations agency in the wake to demystify science course began the National Math and Science quiz in 1993.

It is a way of making science courses attractive to young people.

“The way we teach science courses in school is too abstract, there are also not enough equipment in the labs and a whole lot,” Rebecca said.

In her way to help encourage more girls to pick up science course, she joined the ‘Girls into Science and Technology’ (GIST) and together with her friends, they visit senior secondary schools to interact with girls.

“….when I am free, I join them to visit schools and talk to the girls… science is not difficult, you just have to put your mind to it”


“I have a strong believe that women do better in the sciences because it’s about being accurate and careful with the elements and women are wired like that” Rebecca stressed.

Even though their work is demanding and stressful, the two said they make time to unwind

Rebecca said “I take a stroll by the beach and it calms me, I also try to have a good sleep when I’m stressed”

On her part, Gizelle likes to spend time with friends and family to de-stress.

Ghana recorded a rapid growth of adolescent and youth population in the 2010 population and housing census.


According to the 2010 population and Housing census, females form a significant part of Ghana’s population therefore girls must be encouraged to take up science courses.

“Parents need to encourage their female wards, like my father did, to take up science courses… we need to change our mindset and challenge ourselves. Technology is the future and it is exciting” Gizelle added.