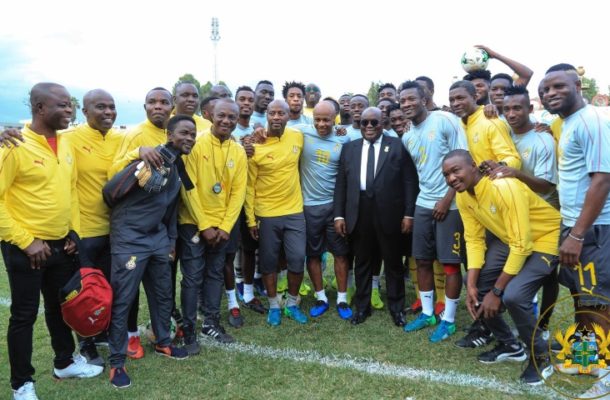 President of Ghana, Nana Addo Dankwa Akufo-Addo says the senior men's national team the Black Stars must win the African Cup of Nations title in Cameroon next year and must at least reach the semi finals of the 2022 World Cup in Qatar.

The President made this known at a breakfast meeting that was held on Monday morning at the Golden Jubilee House.

The breakfast meeting was meant to woe sponsorship for the Black Stars and other national teams in a meeting with CEO's of state firms and corporate organizations.

A budget of $25million has been projected to help Ghana win the AFCON title and also qualify for the 2022 World Cup in Qatar.

“The target is to bring the cup home by winning the Afcon 2022. We must go a step further than our second-place finishes in 1992, 2010 and 2015 and end the 40-year drought for a title,” Akufo-Addo said at a special breakfast meeting at the Jubilee House on Monday.

"We must also reach at least the semi-finals of the world cup in Qatar. Our exploits in 2010, where we reached the quarter-final in South Africa, tell us that once prepared, we have the quality and the talent to match any of the best teams in the world.

“The task might seem daunting, but it is exactly not insurmountable."

Ghana have already secured qualification for the upcoming Afcon, holding South Africa in the qualifiers last month to secure their place.

The Black Stars will be making their 23rd appearance at the championship.

“It is the dream of the nation to win the Africa Cup of Nations again in Cameroon next year, and to qualify for the 2022 Fifa World Cup," Ghana sports minister Mustapha Ussif said of the nation's ambitions.

“These campaigns require a substantial amount of investment to be able to execute this mandate and the government alone cannot shoulder this responsibility at the expense of other sporting disciplines.

“Supporting the Black Stars will enable the government to use the sports budget to support other disciplines especially as we gear towards the Tokyo Olympic Games.

“Historically, the Black Stars have performed well every time corporate Ghana has backed them and it is our hope that you will do the same again."