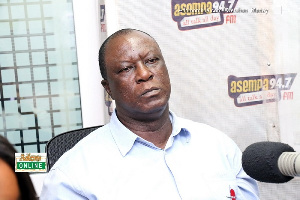 Astitute Football Administrator Takyi Arjun has threatened to expose the masterminds behind the "embarrassment" at the Dormahene's palace when he joined an entourage to pay a courtesy call to Nana Agyemang-Badu II.
There was a  pandemonium at Chief's palace as some members of the football fraternity accompany former GFA president Mr Kwesi Nyantakyi to were heckled by some people believe to be palace guards.

In a viral video people were seen trying to prevent the entourage from entering the palace, accusing them of coming to campaign for one of the GFA presidential aspirant Wilfred Osei Palma.
But Mr Arhin in a reaction, says the move was a plot by some groups and will soon be exposed.

"We never went to the Dormaa Palace to campaign for any GFA Presidential Aspirant but to thank Osagyefo Agyemang Badu II for his support for Kwesi Nyantakyi throughout his trying moments," he said.

"We are aware of those behind the video and the embarrassment that went on at the Dormaa Palace.

"We will expose all those behind the video at the right time and I can say on authority that,Osei Kwaku Palmer knows nothing about our visit to the Dormaa Palace".

The camp of Osei Palmer has also denied having any connection with the visit to the palace of the Chief Executive Officer of Aduana stars.

According to Arhin, the visit was meant to show gratitude to the Chief for his support advisory role to the former GFA capo after falling into the #No.12 troubles.

"We met and thanked Osagyefo Agyemang Badu II for his support and advice to Nyantakyi after the exposè".

He however believes the CEO of Tema Youth Mr Osei Palmer has all that it takes to win the 25 October elections.