We would like to carry Ronaldinho to his grave - Ghanaian Pallbearers 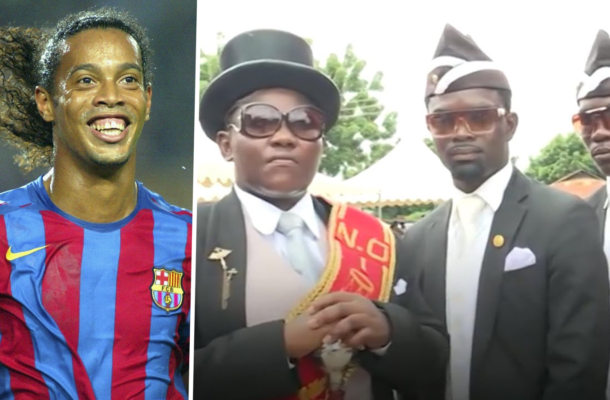 The man behind one of 2020's most popular viral videos also spoke about his enduring disdain for Luis Suarez, despite being a Barcelona fan

Benjamin Aidoo, the man behind the viral ‘dancing pallbearers’ meme, says he would be honoured to 'take Ronaldinho to his final home’.

Aidoo set up Nana Otafrija Pallbearing and Waiting Services in Accra in 2007, aiming to bring some joy into the funeral service by celebrating the life of the deceased with music and dance.

The company have now become famous beyond Ghana and all over the world, with one video of their service in particular finding popularity on social media.

A supporter of Barcelona and Chelsea, Aidoo was jokingly asked which footballer he would most like to take to their grave.

“I wish them a long life, of course, but if I had that chance, I dream of driving Ronaldinho to his last home!” he said. “Then Maradona and finally Messi. Ronaldinho is a player who has always impressed me.

There is some conflict in Aidoo’s footballing allegiance. As a Barca fan, he admits finding it difficult celebrating the success of Luis Suarez – the man who helped dump Ghana out of the 2010 World Cup with his last-gasp handball on the line to deny a certain goal.

“I'm divided. I am ashamed. I feel so bad,” he said. “Whenever I see this player, even when I hear his name, Suarez, I am sad.

“Because a hand from Suarez made my Ghana team return home without being able to play in the semi-finals, which was terrible.

The resulting penalty from Suarez’ handball was infamously missed by Asamoah Gyan, Ghana’s top appearance-maker and record goalscorer. Despite his many accomplishments, Aidoo says many still haven’t forgiven him.

“No, no, they still haven't forgiven him,” he said. “You know that Ghanaians do not forgive.

“The day he missed the penalty, some Ghanaians went to his mother's house and harassed her. His failure had consequences on her mother's health after that, it was really sad.