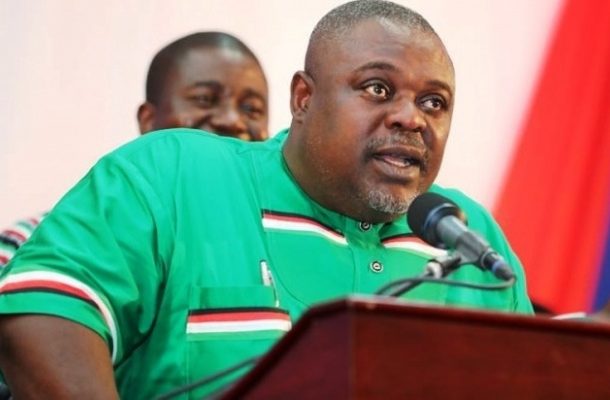 Deputy General Secretary of the opposition National Democratic Congress (NDC), Mr Koku Anyidoho has indicated that his party will not allow newly nominated chairperson and deputy chair of the Electoral Commission (EC), Mrs Jean Mensa and Dr Eric Bossman Asare to have a smooth tenure at their position.

According to the outspoken politician, Mrs Jean Mensa and Eric Bossman Asare have links to the ruling New Patriotic Party (NPP) adding that their nomination for consideration for appointment are part of the NPP’s moves to influence the 2020 presidential and parliamentary elections in their favour.

Reacting to the nomination in a radio interview, Mr Anyidoho accused Mrs. Mensa of being a pro-NPP favourite who does not like the NDC.

Mr. Anyidoho said even though the NDC may not be able to influence the Council of State from approving the nominations, they [NDC] will make sure they engage the public through the media.

Besides that, they will ensure that their [Jean and Bossman Asare's] leadership at the helm of affairs at the Electoral Commission will not be that smooth.

Asked whether Jean Mensa was not competent for the position of chairperson of the EC, Mr Anyidoho responded, “I am not talking about competence… that one when she starts, we will see.”

Rather, he said the problem was with her political coloration and insisted that as for Dr Eric Bossman Asare, he had already publicly declared his links to the NPP and therefore making his nomination biased.

“When you have a deputy like Dr Bossman Asare, as for him, his socks is NPP, his underpants is NPP, his singlet, NPP, toothbrush NPP, his hankerchief NPP, his toothpaste NPP, his bedsheet NPP, his bathing sponge, NPP, that even makes matters worse for Jean Mensa too, because Dr Asare doesn’t hide his NPP coloration,” Mr Anyidoho stated in the radio interview with Accra based Asempa FM.

He maintained that Dr Asare was a professor in his own right, but “I am saying the man himself does not hide the fact that he is NPP."

Asked how he got to know about his coloration, Mr Anyidoho insisted Dr Asare admitted in a radio interview, “he lectures students and he doesn’t hide his NPP coloration from his students. I’m not saying it is a crime to be NPP, let's get it right, same as it is not a crime to be NDC, it is not a crime to be NPP, so if Professsor Asare is NPP, wonderful, but I’m saying that when you carry that colour in the office as head of the EC, then we begin to question the appointing authority, that Mr President, why have you so politicised the Electoral Commission of the Republic of Ghana?"

“Even if Akufo-Addo appoints Gabby Asare Otchere Darko as the EC boss, appoint Asante Bediatuo as the number one deputy, and appoint Ursula Owusu as the number two deputy, the NDC is still going to win the 2020 elections.”

“It is not because any EC person is going to rig the election for anybody oh!, Why, the way Ghana elections is conducted, …even Charlotte Osei when they were calling her names and insulting her and destroying her female persona…, was she able to rig the elections for the NDC, assuming she possibly was going to [do that in favour of the NDC]?