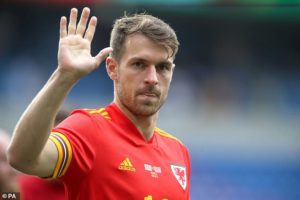 Having already defied expectations with their progress to the knockout phase of Euro 2020, Wales now turn their attention towards beating the odds yet again, when they take on Denmark in the round of 16 on Saturday. Up for grabs is a place amongst the last eight teams at the tournament.

After holding firm and holding Switzerland to a 1-1 draw, Wales then showed maximum efficiency to beat Turkey 2-0, despite having less than 37% of possession. Regardless of the 1-0 defeat against Italy, the Welsh finished second in Group A. The Dragons are considered 5.00 underdogs in the latest Wales v Denmark betting, against their last-16 rivals who are valued at 1.83 odds to win within 90 minutes.

Interestingly, this Welsh team also includes a player with Ghanaian roots. 20-year-old Ethan Ampadu was born in Exeter, England, although his mother is from Wales and his father from Ghana. He could have chosen to play for any of those three nations, although loyalty to his mother’s nation has never been in doubt.

In May 2017, Ampadu received his first call to the Welsh senior squad at the age of 16, ahead of their World Cup qualifier against Serbia. Although he didn’t feature in that game, Ampadu was again called up to the squad in November of the same year, ahead of friendly matches against France and Panama.

Aged 17 years and 56 days, Ampadu became the third-youngest player to represent Wales, making his international debut from the bench against France. Including his appearances at Euro 2020, Ampadu has already earned 26 caps. Unfortunately, he will miss the round of 16 clash with Denmark, following a red card in the final Group A game against Italy.

Unfortunately, that earned Ampadu some unwanted history. The 20-year-old became the youngest player to be dismissed at a European Championship tournament, along with being the first player to receive a straight red card at Euro 2020.

Devastated to be sent off but these boys Massive credit for their fight. Last 16 ! Thanks to all the fans who travelled and who supported from home#TogetherStronger pic.twitter.com/5Mk4wGu0ER
— Ethan Ampadu (@ethanamp26) June 20, 2021

For many fans watching, especially in Wales, the decision by Romanian referee Ovidiu Hategan was perceived as being extremely harsh. While there was no doubt that Ampadu fouled Federico Bernadeschi when challenging for the ball in the 55th minute, whether it was intentionally dangerous is open for debate.

Ampadu did catch the lower shin of Bernadeschi with his studs, although similar challenges at Euro 2020 have been treated with little consistency by referees and VAR. In the first half of the same game against Italy, 23-year-old Welsh winger Daniel James made an almost identical tackle on Marco Verratti, yet he wasn’t even booked.

By contrast, the challenge by Ampadu received a straight red card from Romanian referee, Ovidiu Hategan, with the decision confirmed by VAR. Such inconsistency by match officials is inevitably frustrating for watching fans, while it will be even more annoying for Ampadu, who will be forced to cheer on his Wales teammates from the stands.