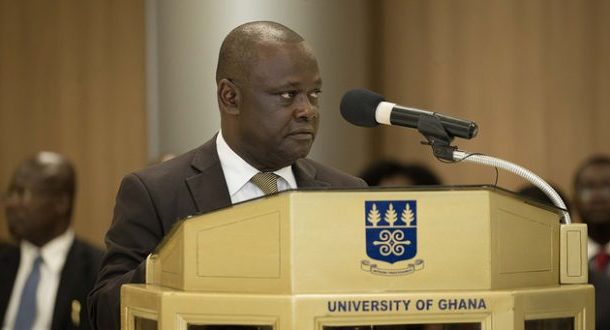 Vice-Chancellor of the University of Ghana, Prof Ebenezer Oduro Owusu

The Vice Chancellor of the University Of Ghana, Prof. Ebenezer Oduro Owusu, has called on Parliament to fast track the approval of revised school fees for public universities.

According to him, the delay in the approval is putting major constraints on the finances of the universities and hampering their operations.

The Fees and Charges Act 2009 (Act 793), which was amended in 2016 seeks to safeguard the public against arbitrary charges and levying of students by universities.

The Act requires all Vice Chancellors to seek parliamentary approval for fees and levies they intend to charge before sending them out to students.

Speaking at the 2018 University Of Ghana Alumni Lecture, the Vice Chancellor indicated that the University of Ghana is currently running on a budget deficit.

“I want to use this opportunity to appeal to Parliament to do something about the fees. This is important for us. We have to ask how we are managing our tertiary institutions.  As we speak University of Ghana has a budget deficit of GHc30 million. So we will appeal to you, Mr. Speaker, to use your good offices to speed up the approval of fees for tertiary institutions,” Prof. Oduro Owusu appealed.

According to the aggrieved students, the governing council of the school has added new components to tuition fees and has also increased some charges without Parliament’s approval.

They argue that the decision by the university will burden students and parents.