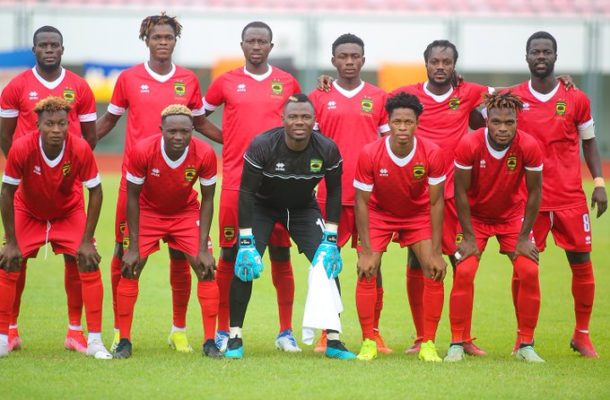 Board member of Asante Kotoko, Mr. Boateng Genfi has given the players and management of the club the board's unflinching support amidst the furore after defeat to RC Kadiogo in the CAF Champions League.

The reds took a solitary 1-0 win against the Burkina Faso side away from home but lost 1-0 at home before losing 3-1 on penalties.

After the shambolic defeat, some fans of the club, journalists, and some sympathizers called on the management of the club to resign en masse.

The reds followed that up with a 1-1 draw against bitter rivals Hearts of Oak before securing a 2-1 win against Nsoatreman FC in an outstanding game.

"We are just coming to give our assurance we are with you through thick and thin. We have lost it is football," he said.

"Kadiogo we have had that experience before It has happened before I was at the stadium in 1979 we beat them 1-0 over there they came here and we lost on penalties. It is the same thing that has happened. That time we had great players like Razak l, Opoku Afriyie and all of them, name that carry weight Kukuu Dadzie we lost"

"So it is football, we have lost don't worry too much about it. I am here to give you the motivation that you deserve I want you to know that you are not alone we are with you. As a board we haven't forgotten about you we are with you," he added.

"Don't think that you have lost everything, you still have it. Great teams like Brazil lose some matches, Liverpool, Real Madrid they all lose, so it is football let's consider it, okay... we have lost what is the way forward,"

"Forget about whatever has happened I am telling you victory will come to you. And we the board we are with you the technical team we are with you," he concluded.