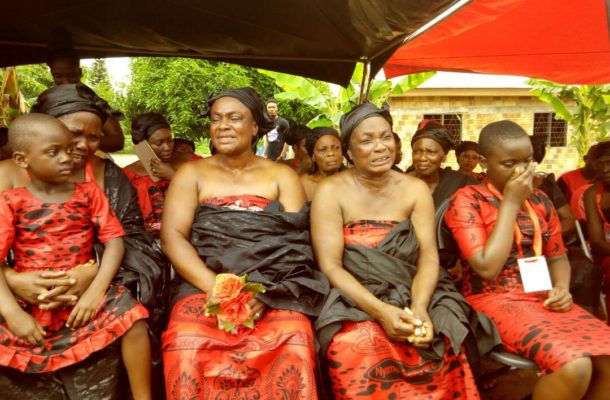 According to the widow, she has been left to her fate since the demise of her husband some three years ago.

Kumasi Asante Kotoko was involved in a gruesome accident on the 12th July 2017 upon their return from a Ghana Premier League match against Inter Allies in Tema.

The team was involved in an accident around Nkawkaw when their bus slammed into a stationary vehicles killing the then deputy equipment officer Mr Thomas Obeng Asare.

Most of the players and staff on board suffered varying degrees of injuries in that accident.

Portia Asare says life after her husband's demise has not been easy as the family has struggled a lot financially.

According to the widow, her late husband's employers Kumasi Asante Kotoko have neglected her to her fate.

She says they have been surviving through the benevolence of some kind hearted persons as her husband's family have also deserted her after the final funeral rites was performed.

"Our living after the demise of my husband has not been easy,it has been by the grace of God and the benevolence of some people."

"I have been neglected by Asante Kotoko and my in-laws who believe I have squandered the little I was given after the funeral. The only person who has been of help to me is Mr Osei Asibey,he has been in constant touch with me and has supported me till now.He has taken it upon himself to cater for the kids till they complete JHS." he told Kumasi FM.