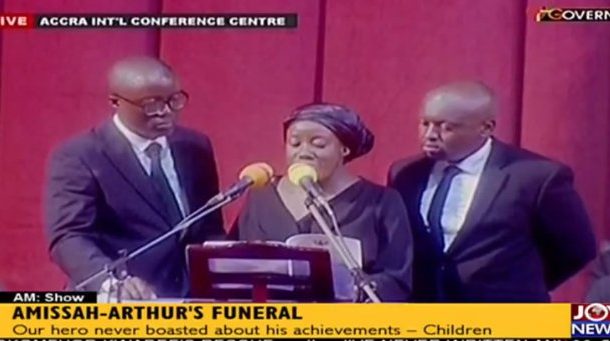 The children of the late Vice President under the erstwhile Mahama administration, H.E Paa Kwesi Amissah- Arthur have stated in their tribute that they have lost their superhero.

Paying tribute at the pre-burial service earlier today at the Accra International Conference Center, the son of the late former Governor of the Central Bank,  Kwesi Nyan Amissah-Arthur read from the tributes of children in a sad mood.

He stated,“We’ve lost our hero and we are sad … He is and always shall be our hero … We know the principles he stood for and how he raised us… I had my own personal superhero … our hero wasn’t necessarily exclusive to us… we have heard several stories about his incorruptible nature …”

“My father, my superhero, who is better than all those I used to admire as a child. We pay tribute to one of the greatest heroes of them all” he added.

The former Vice President died on 29 June after collapsing at Airforce Gym and was rushed to the 37 Military hospital.