The government’s transition team has rubbished allegations by the Acting General Secretary of the New Patriotic Party (NPP), John Boadu, suggesting that the handing over notes made available to the incoming government have been “doctored”.

In a statement signed by the spokesperson for the government’s transition team, Hanna Tetteh, government has said such comments convey the impression that the NPP is looking to demonize the out-going John Mahama-led administration.

“The statement is regrettable and ill-informed and indeed conveys the impression that the NPP is looking for any opportunity it can obtain to demonize the out-going NDC administration instead of concentrating on understanding the state of affairs of the respective Ministries, Departments and Agencies over which they will soon have political oversight.”

This statement is the latest response to some rumours and allegations that have rubbed the government transition team the wrong way.

The government transition team was earlier forced to deny reports that the handing over notes for the incoming President-elect Nana Akufo-Addo-led administration were not ready.

There were also some concerns that government was awarding last minute contracts and recruiting personnel into the public service a few weeks to the official change in government.

Government in this statement once again reiterated that the handing over notes for the various Ministries, Departments and Agencies were ready within the required time frame.

“The handing over notes for the various Ministries, Departments and Agencies were ready within the time frame required by the Presidential Transition Act, 2012 (Act 845), however the Ministers responsible for each sector Ministry were required to sign the handing over notes before sending them to the office of the Administrator General,” the statement explained. 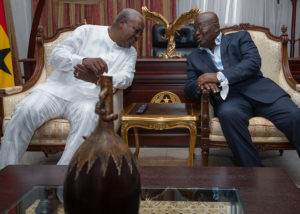 On allegations that the government was recruiting new employees and signing last minute contracts, government has also reminded it remains the lawfully elected government of the Republic of Ghana and has the authority to exercise all the functions of government until the hand-over on January 7, 2017.

“It is important to point out that the current administration is the lawfully elected government of the Republic of Ghana and has the authority to exercise all the functions of government until the hand-over takes place to a new administration. The transition process should not be seen as a shut down of the administration of the outgoing government.”