What if Ajax buys Myron Boadu and Calvin Stengs from AZ Alkmaar on July 1? 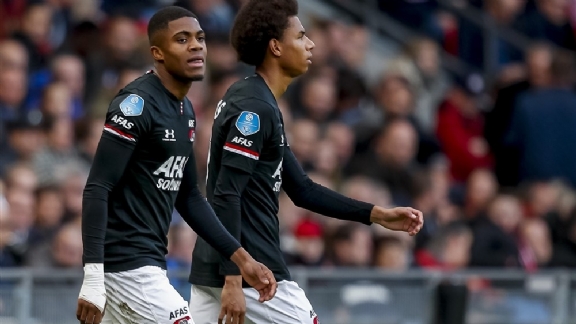 The KNVB will update the clubs on Tuesday via a video connection about the consequences of the two scenarios that are still on the table for the rest of the season. The national federation still hopes that the Eredivisie and Keuken Kampioen Division will be played before August 3, provided the National Institute for Public Health and the Environment says that fighting the corona virus allows it.

Jan Kabalt states that the KNVB would be wise to draw a line below the current season in professional football today. "The current attitude does not show much leadership," said the football lawyer in De Telegraaf on Tuesday. Legally, the KNVB could immediately close the Eredivisie and Keuken Kampioen Division without restriction, because football is prohibited by the government until 1 June and the competition officially ends on 24 May.

"And so CEO Eric Gudde can pull the plug on Tuesday," says Kabalt, who would consider that a sensible decision. "Apart from the most important thing and what Marc Overmars also quoted in De Telegraaf: that currently more than a hundred people die of the corona virus every day and people fight on the ICs for their lives," emphasizes the lawyer. “Then it is Royal, which the K in KNVB stands for, to make way for the aid workers and to create clarity in football country as soon as possible. Which also prevents incredible chaos. "

"Because that will come when there is football after July 1," Kabalt refers to the contractual situations. For example, the collective labor agreement is only about working conditions and not the duration of a contract. “Who pays if Hakim Ziyech wants to play at Ajax for two months longer? And what if Ajax buys Myron Boadu and Calvin Stengs from AZ on July 1? Can Ajax weaken its big competitor AZ in this way? And will clubs that have rented players and are in a bad position in the league get the chance to use those players themselves again after 1 July? ”

“And how should you make a policy if you only know very late in which league you will play next season? The KNVB aims to distort competition ”, Kabalt even says. He advocates decisiveness from the football association and states that a civil judge can assess whether UEFA can exclude a country from European football. “The UEFA regulations do not state anywhere that a national competition must be completed. If you only get to number one to five. This can be done very simply by putting a line below the competition. I would say Eric, what are you waiting for? Every sensible person knows that scaling cabinet measures against corona takes much longer than scaling up. ”

Ajax, PSV and AZ already want to end the season, just like some clubs that are fighting relegation. Feyenoord, FC Utrecht, Sparta and Willem II think it is too early for that, just like the KNVB. Those involved do not expect a decision on whether or not to terminate the Eredivisie and Kitchen Champion Division immediately on Tuesday. The Eredivisie NV, Cooperative First Division also participate, as do the so-called stakeholders such as FOX Sports, the interest groups of coaches (CBV), clubs (FBO) and referees (BSBV), players' union VVCS and the supporters collective.