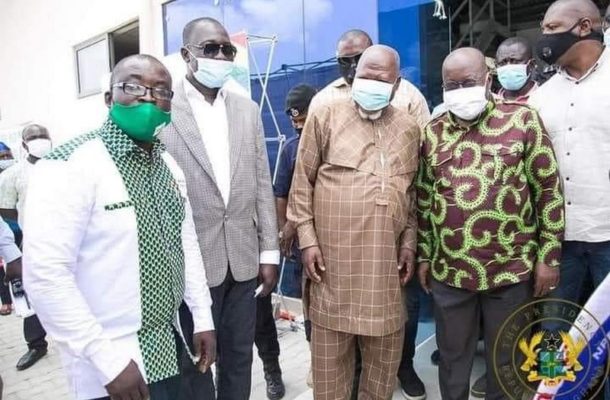 On Friday, 21st August 2020, the President commissioned the Ekumfi Fruit and Juice Factory, an initiative under the government’s one-District-one-Factory.

At the commissioning of the much-touted Ekumfi Juice Factory, Mr Jacobs was seen in a pose with President Nana Akufo-Addo.

According to him, the Ekumfi Fruits factory used to be in the United States of America and the investors decided to set up the factory in Ghana during the NDC administration.

He said they made the decision in 2015 when Mr Jacobs used to be Central Regional NDC chairman.

“Some young investors came to Ghana to set up the factory in Ghana when Allotey Jacobs was the Regional Chairman, and so all the processes and paper works started during the NDC time.

“During the commissioning, the investors, knowing the relationship they had with Allotey some years back, called him and he had no choice than to attend the commissioning. And so my point is that Ekumfi Fruits factory started during NDC time and because we couldn’t finish before we left office only for the New Patriotic Party to capture it as 1D1F,” he said.
Mr Jacobs is currently on suspension from the party for engaging in activities the party says is against its constitution.

Listen to him in audio below: