Why government has proven Ghana to be a great football nation 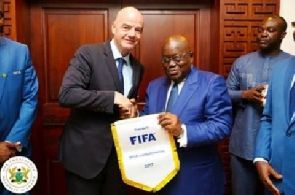 Following the Anas football corruption exposé the government of Ghana has not only interfered with the affairs of the Ghana football association but also succeeded in preventing FIFA from holding any official meeting with members of the GFA and despite this extreme governmental interference the country still dodged a FIFA suspension and this shows why Ghana has proven to be a great soccer nation on all fronts.

In terms of sporting performance the Black Stars have won four Africa Cup of Nations titles in 1963, 1965, 1978 and 1982. At the youth level the country became world champions of the FIFA U-20 tournament in 2009 and still remains the only African country to achieve that honor.

On football culture anyone that has visited Ghana knows how football-crazy the country is. The game is the most popular sport and it is played and followed by both children and adults, female and male.

Now Following the Anas video the government of Ghana stepped onto the interference pitch against the GFA. What is played on this pitch is not a soccer ball but laws and legalities. Enough is enough says the government as it started court cases to wind up the football association.

Will FIFA – that the GFA is a member – therefore suspend Ghana for political interference?

Last Thursday a government delegation headed by Isaac Asiamah the Minister for Youth and Sports met with a FIFA delegation led by its President Gianni Infantino in Zurich and key among the outcomes of the meeting was the FIFA decision to replace the GFA executive body by a normalisation committee.

Having succeeded in getting FIFA to invoke Article 8 of its Statutes to replace the executive committee of the GFA by a normalisation committee, government demonstrated deep understanding and competence on international football matters without getting a ban.

Why will FIFA agree to back down on their earlier decision to suspend Ghana should government fail to withdraw the court petition to wind up the GFA by the deadline of August 27 after meeting with government officials? It is therefore reasonable for one to conclude that FIFA is now satisfied and convinced by government’s intentions and approach.

When President Akufo Addo spoke to Infantino over the telephone it was to make clarifications and present compelling argument and the outcome of Thursday 16 August meeting means government communicated well and prove to the world that Ghana is indeed a great soccer nation not only on the pitch but also in terms of understanding of the regulations that govern the game.

If government had made a poor case when they met FIFA it is not difficult to imagine that the country would have been suspended long before and the Black Princesses and Aduana Stars could not have participated in the FIFA Women’s World Cup and Africa respectively.

Cameroon, Mali, Nigeria and many other member associations were all once suspended by FIFA during similar internal chaos but Ghana has avoided a ban despite government’s interference proving why the country is a great soccer nation on all fronts.