Why is Dr Bawumia the only missing leader during this coronavirus Pandemic? 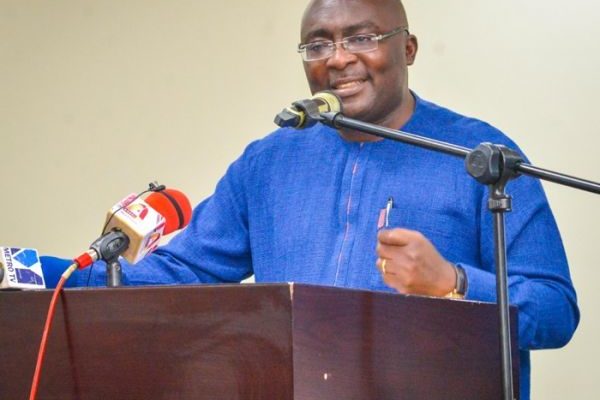 The vice-president Dr. Mahamudu Bawumia, is talkative, he is not one to shy away from the microphone, he became a household name not through action, but through talking.

Silence is not his strong suit; he will take advantage of every moment to make his voice heard. You can imagine my surprise and disappointment when during this coronavirus pandemic which has brought the world to its knees and the only thing that, is needed at this point in time, is information, our vice-president is missing in action.

The vice-president of the United States of America, Mike Pence, is the one leading the COVID-19 taskforce in that country.

Anytime Donald Trump addresses the nation, his vice-president will be by his side and will have a moment to tell the nation, what the task force, has been able to achieve.

In Ghana, our vice-president, who is very loud, has suddenly gone silent, at the time we needed him to add his voice to the many voices playing out in the country.

The reason why his silence is disappointing is simple, he is the number two in the country, his voice unlike mine and many Ghanaians goes far and carries weight.

There are two things from this novel coronavirus that is bringing the world to its knees, the first and most important is the health sector and secondly and equally important is the economic angle.

As at yesterday on CNN, it was projected by more than forty economists they have spoken to that, the United States of America, is in recession.

It could be argued that, Dr. Bawumia is not an expert in matters relating to health, but he is an economist, whose views on how the pandemic is going to affect the economy, is very critical at this time in the life of the country.

Silence is no longer golden at this time. Dr. Bawumia indulged talking when it benefited him and the New Patriotic Party (NPP).

In the run up to the 2016 elections, Ghanaians were convinced to turn a new page, because Dr. Bawumia, was all over the place, pontificating theories that sought to paint the administration at that time incompetent.

Unfortunately, the expectations of Ghanaians are so low it is obscene, they bought into the lies and voted the John Dramani Mahama led administration out.

Dr. Bawumia and the NPP, has set the bar of good governance even lower, it is sickening why we are not angry enough to want to tell them in the face.

Dr. Bawumia, came in with an eye on a national office and an exaggerated sense of importance and because of that, Ghanaians bought into their lies and convoluted ego and voted for them.

Dr. Bawumia, has been reduced to a serial caller, he is only allowed to speak when it has to do with propaganda. Anything short of that, and they are voices that easily drown his.

Leaders emerge in times of crisis like we have on our hands, not when it is convenient for them. A moment like this is the time, one has to stand up and be counted, not when you are thrown out there to go and be churning out figures you understand, as well as makes no sense to millions of Ghanaians listening to you.

The pedigree of Mahamudu Bawumia and his like in the New Patriotic Party is troubling enough that a decent society would not hang its hopes on their types, because timing, as they say, is important in everything we do.

When all is said and done, how does Dr. Bawumia wishes to be remembered, as a leader who stood up to be counted, when the country was facing a pandemic with the capacity to wipe out every one or as a leader who chose the path of convenience to stay silent.

Choosing the path of silence is not the best option. Education, accurate information made available to the public is the only way to stop the spread of the coronavirus.

Time, has exposed Dr. Bawumia as an opportunist. God willing, very soon this crisis too shall pass and we will be back to the political season, as this year is an election year, Dr. Bawumia, will start mounting platforms, to tell us how lucky we are as a people to have them preside over us.

But the trouble with Dr. Bawumia, et al, is not that they are pretending to be the brightest crayons in the box. We can see from afar that they are not.