Why my father's death has affected me - Obour shares sentiment 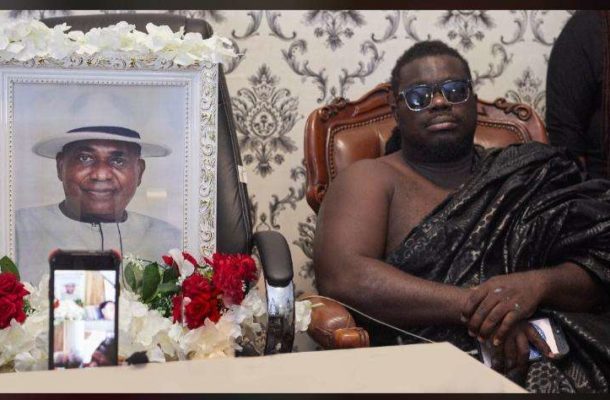 Former President of the Musician Union of Ghana (MUSIGA), Bice Osei Kuffour, popularly known as Obour has revealed why the death of his father, Nana Osei Kuffour, has affected him so much.

According to Obour, who is also aspiring to be parliamentary candidate for the Asante Akyem South Constituency in the Asante Region, his late father did not enjoy much from him as a son after toiling harder to raise him up.

Appearing on Peace FM's Entertainment Review show Saturday, May 16, 2020, to share his sentiment, Obour said his late father supported him from childhood through to adulthood after the death of his mother years back.

According to him, his father's vision was to ensure he [Obour] becomes the next Member of Parliament (MP) for the Asante Akyem South, which he practically worked towards everyday until his death. He recounted how his father accompanied him to the party's constituency office to file his nominations.

Obour disclosed that he and his siblings had planned throwing a lavish party on his father's 75th birthday when the unexpected occurred.

"...The timing of the death of my father affects me so much, he didn't enjoy much from me as a son. This was the time he was going to enjoy what he long toiled for. We planned throwing a lavish birthday party for him as he turned 75 this year. As a father who was also a friend, he accompanied me to to pick my nomination forms and did evrything in his capacity to help me", he emotionally said on the show hosted by Kwesi Aboagye.

Obour said although he has deeply been affected by the unexpected departure of his father, that cannot end his parliamentary ambition as according to him, "becoming the next MP for Asante Akyem is the only thing I can do now to glorify my late dad".

Asked whether or not he believes VOVID-19 killed his father as has long been made to understand, Obour replied: "the timing isn't helpful enough to have doubts or argue with any medical doctor but if my father indeed died of coronavirus, then his virus type was a special one because it couldn't spread to anyone who came into contact with him".