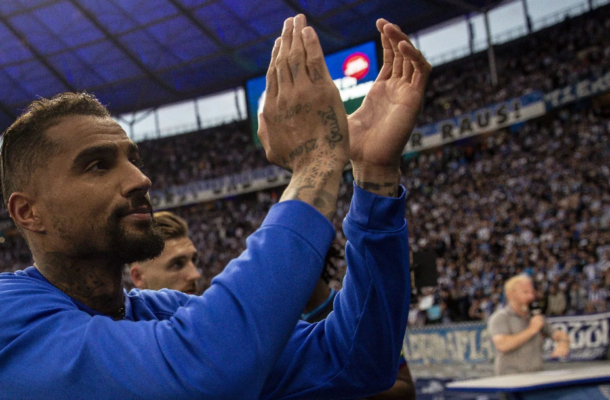 Kevin-Prince Boateng impressively demonstrated his qualities as a leading player at Hertha BSC in the relegation games against Hamburger SV.

The veteran took on a lot of responsibility before the decisive kick in Hamburg, was even allowed to suggest the line-up and address the team. It is still open whether the 35-year-old will remain under Sandro Schwarz.

The native Berliner's contract expires at the end of the month. It is clear that Boateng is no longer physically able to play an entire season as a sporting reinforcement for the team.

But in the big moments of a season, Hertha can perhaps continue to rely on him. New coach Schwarz first has to really get to know the midfielder.

"In a personal conversation, I want to get an impression of his point of view and what feelings are driving him," quoted Sport Bild as saying the head coach brought in from Dynamo Moscow.

As a result of the successful relegation games, Boateng had let it be known that he could well imagine continuing his active career at Hertha. The club would be well advised to respond and keep the integral figure.

Because Schwarz, according to his own statement, wants to pay particular attention to the atmosphere in the old lady.

"The first important point is that we appear as a community, with the team and all employees. We want to create a change of mood as a group. To do this, we have to develop a sense of mutual support," says Schwarz.

It is obvious that Boateng could play a key role without having to complete 34 Bundesliga appearances.