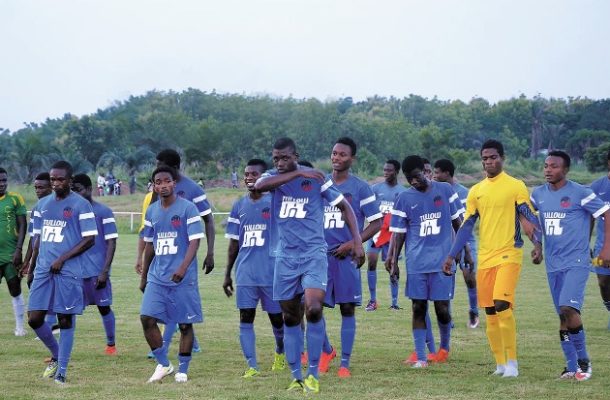 Ghana’s Right to Dream football academy is not only producing top players but also working to ensure their true value is recognised by European clubs. Will McBainreports

Aged 12, Burkinabé footballer Ousseni Bouda caught wind of trials taking place in northern Ghana, hosted by the Right to Dream football academy. Secretly wearing a football kit underneath his school uniform, he biked and hitchhiked from the outskirts of the Sahara desert and across Burkina Faso’s border with Ghana, only to discover the trials had finished.

As he sat dejected in the rain, a scout acknowledged Bouda’s passion and arranged a further match on his behalf. His talent shone through, and he became the first boy from Burkina Faso to engage in a football and education programme at the academy in Ghana, before travelling to the US on a scholarship at 16. In America, his footballing and academic skills flourished and he earned an athletic scholarship to Stanford University.

Bouda is now on course to join a club of over 80 Right to Dream graduates who have completed studies at major universities in the US or Europe. He’s also expected to qualify for the next draft of college students from which North America’s Major League Soccer (MLS) teams annually select new players. Taking inspiration from Liberia’s President George Weah, himself a former footballer, Bouda’s future ambition is to lead his country, telling staff he’ll “make sure it’s not one of the poorest in Africa anymore, lifting it out of poverty”.

Such dreams are inculcated on the academy’s eight football fields nestled against the banks of the Volta river near Atimpoku, a two-hour drive northeast of Ghana’s capital, Accra. With over 50 staff, students learn robotics, perform in theatrical renditions of plays such as Lord of the Flies, and study in classrooms named after inspirational Africans like Nelson Mandela. Eighteen teachers provide a Cambridge-accredited curriculum with core STEM and humanities subjects. Students sit IGCSE examinations, which open educational pathways to schools in the UK.

“This isn’t a European approach where, if you’re not good enough at the end of the season, you’re asked to leave,” says Tom Vernon, the academy’s founder and former Manchester United head scout in Africa, who moved to Ghana in 1999. “In Europe that may be morally objectionable, but you still go back to a good school and you can find other clubs, so you’re not left high and dry. I think this Right to Dream model has the purpose to develop the country, and not primarily the objectives of a first team.”

Since 2005, the academy has produced nearly 50 professional footballers who have signed contracts at clubs in Europe and North America. Leicester City’s Nigerian striker Kelechi Iheanacho trained at the academy. The tricky winger David Accam now plays for Nashville SC in the MLS and for the Ghanaian national team. Strasbourg’s forward Abdul Majeed Waris is another graduate of the academy, which assesses 25,000 predominantly nine- and 10-year-old children each year competing for 18 scholarships.

With unparalleled opportunities and fierce competition, the academy’s programme demands intelligence and exceptional footballing ability. Yet once a child earns a coveted spot – it costs the academy $25,000 per year to educate, feed and house each child – a six-year scholarship is secured, regardless of footballing progress, allowing children to develop in a settled environment.

The academy began in 2001 on a solitary dusty field in Accra, its footballers quartering with Ghanaian, British and American coaches and volunteers at Vernon’s house. After securing a permanent base, Tullow Oil – the mineral exploration multinational – provided sponsorship, and Manchester City later partnered with the academy for several seasons, granting Right to Dream a reported £850,000 a year. Tullow continues to provide sponsorship and the academy receives money from philanthropists. US and European institutions who take on graduates cover the costs of scholarships through partnerships with Right to Dream.

Manchester City’s partnership ended when the players City signed from Right to Dream failed to get game-time, leading Vernon and investors to buy Danish Superliga outfit FC Nordsjælland in 2016. The stadium was renamed Right to Dream Park, and Ghanaian footballers now pack out the starting eleven.

The results have been eye-catching. FC Nordsjælland boasts the youngest team across Europe’s top divisions, with an average age of 21.5 years in domestic games. The club qualified for the Europa League competition qualifying rounds in 2019, mostly with players from the Ghanaian and Danish academies.

This season’s top pick from Ghana, the versatile attacking midfielder Mohammed Kudus – who scored 11 goals in 25 appearances for the “Wild Tigers” – signed for Ajax for €9m ($10.4m) in July.

Money from Kudus’s transfer will be invested in additional coaches and improved facilities, while bolstering the number of girls placed at the academy in Ghana, which is the only girls’ footballing academy on the continent. In 18 months, some of them could join Nordsjælland’s Danish Women’s Cup winning team. Others will start scholarships in the US and could eventually join a club that is set to compete in the Women’s Champions League.

“The move that we made here, to be able to maximise transfer fees and bring our brand into Europe, means that we are now in a position of sustainability,” Vernon says. “The system is rigged against African youth development, so we had to buy a club here to provide part of that solution.”

“African players are grossly undervalued in the European market. You can go to South America and pay €50m for a 16-year old like Real Madrid did recently, but people turn up in West Africa, and seem to think that anything above €250,000 for a transfer fee is trying to take advantage of Europe, in some kind of bizarre way. So we had to take a step here in order to realise real transfer value, which then provides a route to sustainability for Right to Dream.”

The business model is unique, and offers a potential hybrid approach to replace the litany of failed academies in Africa, according to Stefan Szymanski, professor of sport management at the University of Michigan, and co-author of Soccernomics.

“This model is in some sense, classically the wrong way round, in as much as the money and assets comes from Africa, and goes into Denmark,” he says.

“This partnership shows there’s room for other models with some joint partnership, where European clubs put in the money, but the Africans get ownership control.”

Szymanski says a rapidly expanding population in Africa means that a commercially viable domestic league will eventually make economic sense. It will be a long wait however, and with deep corruption hampering national federations, few European clubs invest on the continent.

“Ultimately, the European clubs do not want African football and its domestic football to be particularly successful, because, well, where are all those massive fans in Nigeria going to go?”

Vernon says FIFA must allocate more places for African nations in World Cups. “The more slots you have in the World Cup, the more money you generate, meaning you can build academies and improve youth development. It’s amazing how some of these things can hide in plain sight, and maybe it’s time for a slightly firmer approach in terms of how African football is positioned within the global game.”
Source: Africanbusinesmagazine