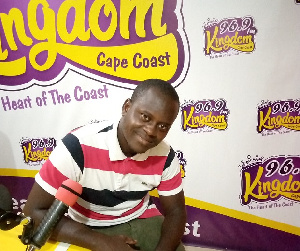 Gospel musicians collaborating with secular artists in Ghana is nothing new especially in this 21st century. Ghana has seen Herty Borngreat, a gospel singer feature Sarkodie on her “Take Them to Church" album in 2013 which was produced by Kaywa.
Daddy Lumba, a highlife artiste and Great Ampong, a gospel artiste formed a group called Kojo Kojo to release hit single, “Hossana” in 2015.

Opanka featured Gifty Osei, a gospel artiste on a song entitled Abuburo Nkosua and Nacee, a known gospel vocalist also invited Guru on his new jam dubbed Boys Boys which was a hit in Ghana.

However, most of these collaborations have attracted negative criticisms and sometimes insults mostly on the gospel arts at the expense of the numerous advantages that come with it.

Most Ghanaians interpret this to be unholy on the path of the Gospel artists quoting 2 Corinthians 6:14 to buttress their point at the expense of the numerous advantages that comes with it, thereby limiting other gospel artists from doing same.

Yaw Sarpong & Asomafo combining forces with Sarkodie on a song titled Ahobrase3 I think would open the flood gate for lots of other gospel musicians to collaborate with other secular arts weather good or bad but before we condemn or applaud them here are some lessons I think we should learn from the collaboration and limit the condemnation as we have always done to other gospel artists in the past.

Yaw Sarpong and Asomafo collaborating with Sarkodie should be seen as joining forces where Sarknation would get to know Yaw Sarpong's songs and vice versa. This is very necessary for spreading the word of God.

Again, this collaboration would expose Yaw Sarpong to this new generation more than ever. In as much as I agree that Yaw Sarpong is popular, we should also note that, due to social media and other factors, Sakodie has the most youth appeal than Yaw Sarpong and if not all, most of the gospel musicians in Ghana, it is therefore very prudent for lot of gospel artists to join forces with other secular artists to be able to win some of their followers.

Furthermore, it should be noted that we already have most of our secular artists creating great gospel lyrics like Kwabena Kwabena ft Steve Bedi – Bue Kwan which was adjudged by industry critics as one of the best Gospel songs ever produced in Ghana, Manifest Ft Obrafuor- No shortcut to heaven, Mighty Jesus’, released by Edem and featured Jay So and EL, etc.

It should therefore not be seen as disastrous if gospel musicians join forces with secular artists on a song, if it is, gospel musician, Yaw Sarpong, wouldn't have said he believes rapper Sarkodie is the vessel God is using to widen his influence in the music industry. It is obvious Yaw Sarpong knows the mileage Sarkodie will give him.

To end with, I think it should be prudent if the categorisation of a song is based on the content and not the personalities or the beat. And so in the same way as we have a gospel reggae and highlife gospel song, we can also have a hiplife gospel song etc and spread the word of God quickly.

Assume gospel lyrics in a hiplife songs are being played in the night clubs speaking against immoral arts, at least the gospel fraternity can also win souls from the night club for God, for Mark 2:7 says:

"And when Jesus heard it, he said to them, “Those who are well have no need of a physician, but those who are sick. I came not to call the righteous, but sinners.”