Yaya Toure's agent Dmitri Seluk bites back: 'If Pep Guardiola wants a war then he can have one' 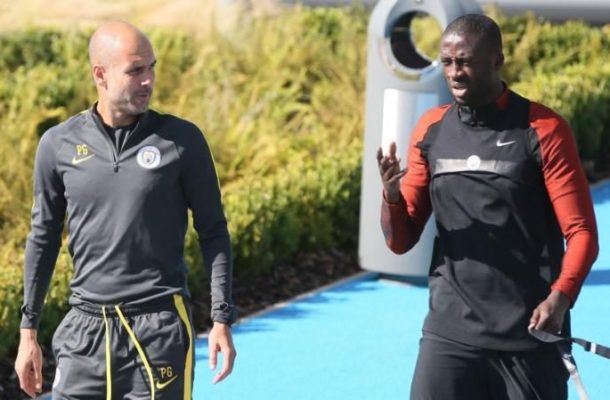 Yaya Toure's agent, Dmitri Seluk, has fuelled the fire between his player and Pep Guardiola by declaring 'war' on the Manchester City manager.

Guardiola earlier warned Yaya Toure he will never play for Manchester City again unless there is an apology after his outspoken agent accused the manager of “humiliating” the midfielder by omitting him from the club’s Champions League squad.

In a response reported by Sky Sports News, Seluk took aim at the City manager, saying: "I will apologise to Guardiola if he will apologise to Pellegrini for what he did to him. If you are a gentleman this just does not happen.

"He signed a new contract last year then he gets pushed out for Guardiola to come in. Pellegrini was a gentleman.

"Guardiola also needs to apologise to Joe Hart. It's not right to come to England and then get rid of a few English players. "Guardiola wants a new future for Yaya, for Hart, and they won't be the last."

Asked again whether he would apologise, Seluk finished: "Well, what do I need to apologise for?"

Seluk continued: "If Pep Guardiola wants a war, then he can have one.

"Pep didn't like my opinion? But what does he expect me to say when he does this to Yaya?

"Yaya is a player who has made history for Manchester City.

"I spoke out because I felt that Pep was being vindictive to Yaya.

"Unfortunately for Pep, we live in a world where you have the right to free speech.

"He has reacted to what I have said about him by punishing Yaya again. But I'm not surprised."

"Pep doesn't want players with personality. He only wants players who are scared of him and will do what he says.

"The first thing he did when he arrived at City was to pick a fight with Yaya and Joe Hart, two of the club's biggest players.

"Hart is England's goalkeeper; Yaya has won the African Footballer of the Year four times.

“They have both been big personalities in the dressing room at City and Guardiola doesn't like that.

"He was the same at Barcelona. He forced Samuel Eto'o to leave the club. Zlatan Ibrahimovic, a player who cost £57million, was sold for just £18million.

"It has to always be about Pep Guardiola, no-one else.

"Will I apologise? Well, I have learned that you must never say never.

"Look what Guardiola did to Pellegrini. He took his job when he was still fighting for titles.

“Colleagues should have respect for each other, especially in England where it is important to act like a gentleman."