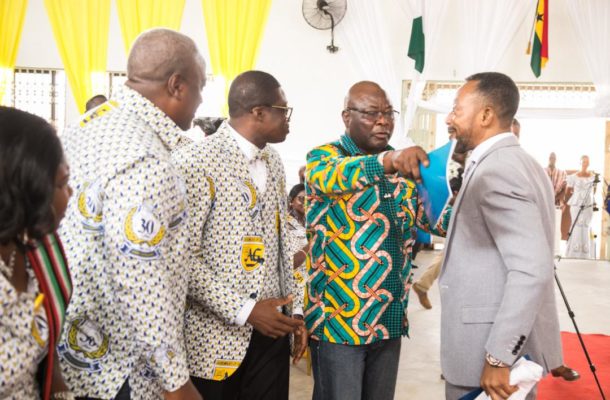 Both Mahama and Rev. Bempah had been invited by the Church to grace their 30th Anniversary

An avowed loyalist of ex-President John Mahama, Appiah Stadium has chastised his godfather for exchanging pleasantries with Prophet Isaac Owusu Bempah whom described as a charlatan.

According to him, the ex-President made a very big mistake shaking hands with the Founder and Leader of the Glorious Word and Power Ministry, who has consistently prophesied doom including death about him, adding that this show of magnanimity by the former number one gentleman is outrightly wrong.

The security detail of ex President Mahama reportedly caused a scene and disrupted church service at the Holy Ghost Revival Center of the Assemblies of God Church, South Odorkor, Accra when they physically tried to stop Rev. Owusu Bempah from exchanging pleasantries with Mr Mahama.

Both Mahama and Rev. Bempah had been invited by the Church to grace their 30th Anniversary.

The incident happened when Rev Bempah, who had to leave earlier because he had to go and preach at his own church, was asked by the Host Pastor to exchange pleasantries with the guests who were present, but that move was resisted by the bodyguards.

Commenting on the incident in an interview with Akwasi Nsiah on Kasapa News, Appiah Stadium said the bodyguards should have physically assaulted Rev. Owusu Bempah to teach him a big lesson not speak ill of the opposition leader.

“For me I maintain that Rev. Owusu Bempah is not a man of God as he purports. He’s a charlatan who should not be taken seriously. You accuse ex-President Mahama then as Vice President of killing his former boss, late President Mills in order for him to become the President. You’ve told Ghanaians that Mr Mahama’s hands are soiled with blood, yet this is the same hand that you were so eager to shake. He’s lucky that he left the scene unscathed, the bodyguards should have stoned him to teach him a lesson. You can’t speak such ill about a person and then when you see him in public you approach him with smiles wanting to shake hands with him. He either stops saying evil about Mahama or when he sees him in public he should not go near him or else he’ll have himself to blame,” he warned.