Young graduate ventures into ice cream making; tells how it all started 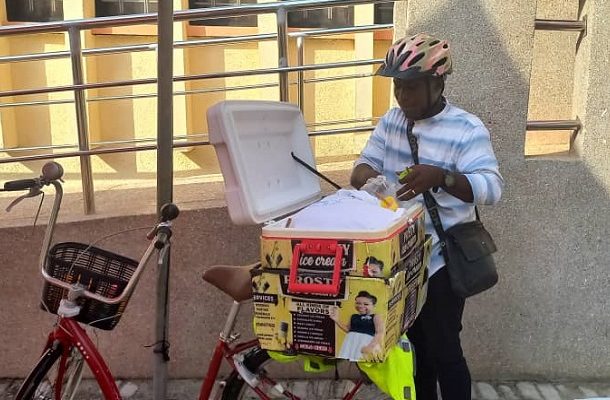 Prosper selling his ice cream on a bicycle

A young man by name Prosper Yeboah has added up to the many who have through thick and thin broken all odds to be successful.

Though his target of success is not reached, the 39-year-old man is very proud of himself, especially for pushing his ego aside and joining his wife to make it big in their ice cream business.

According to Prosper, it was initially a very difficult decision having thought about what people were going to say about a man selling ice cream.

He disclosed that his wife, Fausty started it when the family could barely afford to purchase just a freezer for the business. According to him, it took the benevolence of someone to give them a freezer on high purchase but the duo can now boast of about over 10 Freezers in just three years now.

"Things were difficult and there was no support from anywhere so the idea came and we decided to give it a try and here we are," he revealed.

The ice cream is named, Prosty with its brand ambassador being their own daughter.

The rich ice cream which is made with very little sugar is enjoyed by all irrespective of gender and age.

Prosper now has many vendors which is seeing the growth of the ice cream business and he is aspiring to open branches across the country.

If on any day, you feel for an ice cream that will boost the immune system, don't hesitate to go for Prosty ice cream.