Your 'illegal' endorsement will cost Eugene Arhin – Omanhene to Akufo-Addo 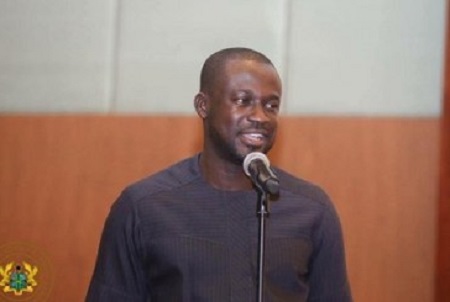 The President, Nana Addo Dankwa Akufo-Addo, has come under fire from Adom TV journalist Omanhene Kwabena Asante for his recent endorsement of Eugene Arhin as a parliamentary aspirant for the New Patriotic Party (NPP), in the Awutu Senya East constituency.

Akufo-Addo extolled the virtues of his communications director last week while on an official visit to the Central Region, saying that Arhin had turned into a constant "bother" on issues of development for the constituency.

But addressing the issue on Asempa FM on Monday, September 5, 2022, Omanhene said, "Tell Eugene Arhin, the president has ruined his campaign...if he genuinely wants to compete for the Awutu Senya East seat, the president has opened the floodgates for party members to disdain and disrespect the new executives."

He questioned, "So a president goes on a regional trip to look at construction projects; what does that have to do with Eugene Arhin, who advocates for projects to come to the area and that he should be taken into consideration when the time comes?"

In addition, he said that Akufo-Addo was promoting Asenso-Boakye for the 2020 elections despite the party's warnings against such behavior, using the same model he employed for a former Deputy Chief of Staff who is now a Member of Parliament for Bantama.

"The president needs to stop what he's doing since he did it with Asenso. Because party members and Ghanaians will follow the president's lead when he makes a mistake, he ought to halt it," he said.

He also emphasized how such an endorsement would affect party discipline more broadly.

"Were we absent when new management revealed measures to control members? Observe what the president is saying," he fired.

In reference to the fact that Akufo-Addo won't be running for office after being re-elected in 2020, he continued, "If you identify with the president, you will lose because the president has nothing to lose."