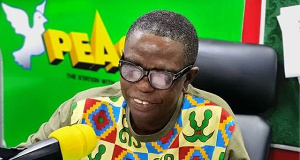 Kwesi Pratt has cautioned the Commissioners of Ghana's electoral management body to watch how they talk to opposition political parties in the country.

According to Kwesi Pratt, the Electoral Commission has been using unsavoury words on the parties for being against their decision to compile a new voters' register.

He told host Kwami Sefa Kayi that the opposition parties have been branded as "nation wreckers" which, to him, doesn't reflect the neutrality of the Commission.

"How can you then supervise a politically neutral process if you believe some political parties are nation wreckers?'' he asked.

He advised the Commissioners to ''watch their tongue when talking'', adding that their responses on the new voters' register feed into the notion that they want to rig the 2020 elections.

"If you don't choose your words carefully, you strengthen that impression even though it may not be true. If you're a Commissioner and you talk publicly against a political party, that is the impression you're likely to create and that's a problem. It's a major issue," he stressed.

He also called on the election management body to stop portraying a headstrong attitude towards the opposers of a new voters' register.