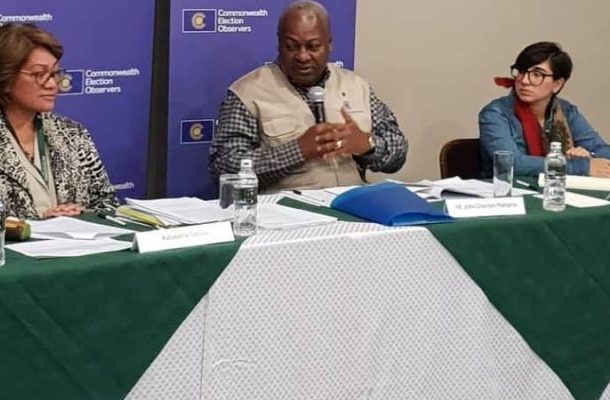 Former President John Dramani Mahama, who is leading a 23-member Commonwealth Observer Group to the harmonised Zimbabwean elections taking place on Monday, 30 July 2018, has assured the world that the group “will perform our role with impartiality, independence and transparency”.In his arrival statement at a press conference in Harare on Wednesday, 25 July 2018, Mr Mahama said: “As independent observers, our mandate is to consider factors that affect the credibility of the electoral process and report on whether the vote has been conducted according to the national, regional and international standards to which Zimbabwe has committed itself."Mr Mahama commended the active participation of women in the Zimbabwe polls and stated that it was “noteworthy that for the first time in Zimbabwean electoral history, women are among the presidential candidates; a total of four”.He encouraged all stakeholders to be responsible and play “their part in ensuring a peaceful and credible process”.The group, which will be deployed to 10 provinces across the country, will remain in Zimbabwe after the election till 6 August 2018.