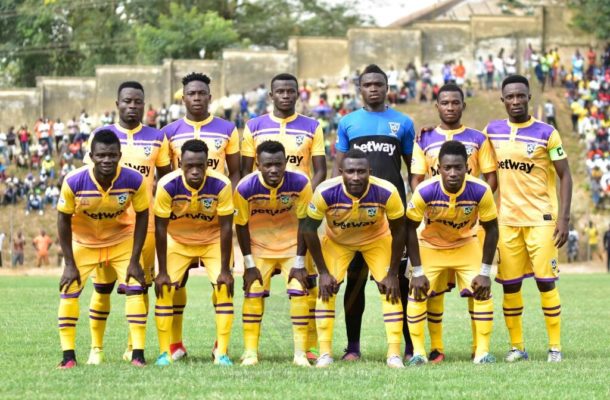 With 116 matches out of the 120 played at the end of first round of the 2017/18 Zylofon Cash Ghana Premier League (ZCPL), the league standings look very fascinating both at the top and bottom with all 16 teams battling for either honour or survival.

Reigning Ghana Premier Champions, Aduana Stars have four outstanding games and these games could define their season as they currently languishing in the relegation zone with 14 points from matches played so far.

The chase for the maiden ZCPL title looks very competitive with only three points separating first placed team and the sixth placed team and this should be enough proof to show how congested the top of the league title is.

Medeama look certain to finish the first round as leaders despite having a game in hand ahead of the closest chasers Ashgold who have played all 15 matches.

Reigning Premier League Champions Aduana Stars could stage a magnificent comeback in the ongoing league if they are to win their four outstanding matches but it definitely looks a stern test for the ‘Ogya Boys’.

Premier League new boys, Karela and Dreams FC have had a terrific first round and have been touted by many pundits to be the surprise contenders for the league considering their stellar home outing and fantastic display of good football.

The goal king race in the ZCPL is looks really poised and will certainly go down to the wire with 239 goals scored in the first round.

Bechem United’s Hafiz Wontah leads pack for the top prolific strikers in the ZCPL having scored eight goals in the process.

Tema based Inter Allies lead the chart for the most ruthless team at home as they have won all seven matches in the first round and are yet to concede a goal.

Head coach Kenichi Yatsuachi has once again demonstrated his flawless defensive prowess and good home form which can juxtaposed to the ruthless home form of WAFA in last season's league.

Kotoko, Karela, Medeama, Berekum Chelsea and Ashgold have lost once at home in the first round of the season wit the likes of Liberty Professionals, Wa All Stars, Ebusua Dwarfs and Hearts have all lost twice in thesecond round.

Despite having a dreadful home form this season, WAFA have the best away form at the end of the first round having won three, lost four and drawn once from their travels.

Teams which include, Wa All Stars, Ebusua Dwarfs, Eleven Wonders and Aduana Stars, Berekum Chelsea, Bechem United are yet to win away from home.

Meanwhile, the league is expected to take another two-week break as all outstanding expected to be cleared within this period, as we start the second round with all 16 teams at par thus with regards to the number of matches played.