10 injured in violent demo at KTI after teacher slapped student 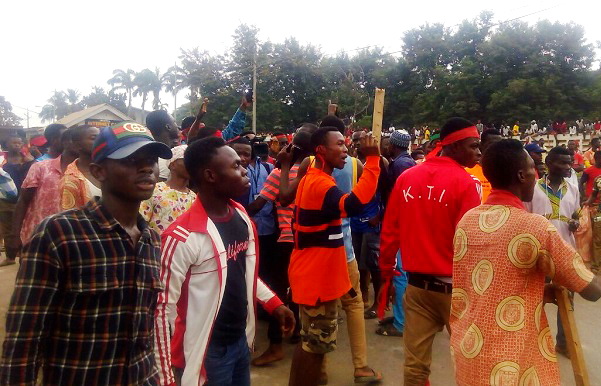 At least 10 students are reported injured in a violent demonstration at the campus of the Kumasi Technical Institute (KTI) on Sunday night.

The demonstration, according to reports was a result of a brawl between a tutor and a student over a mobile phone and an unapproved dress that was being worn by the latter.

The school is currently under heavy security guard and classes have been suspended.

reporters on the ground say there is tension in the school as some students have begun packing out of the school.

Reports say the school’s storeroom was broken into by the enraged students who retrieved cutlasses and clubs to vandalize school property.

Vehicles, lighting and water systems, furniture and other school property were not spared in the onslaught.

Scores of the students had been picked up by the police at the time of filing this story; Mynewsgh.com reporters say six of the students have also been hospitalized after sustaining injuries in the demonstration.

Management of the school is yet to comment on the development.

The Ashanti Regional Minister. Simon Osei Mensah and members of the Regional Security Council are expected to visit the school in the coming hours.

The riot comes exactly after a year of student protests at the Kwame Nkrumah University of Science and Technology (KNUST) over the conversion of same-sex halls to unisex ones.