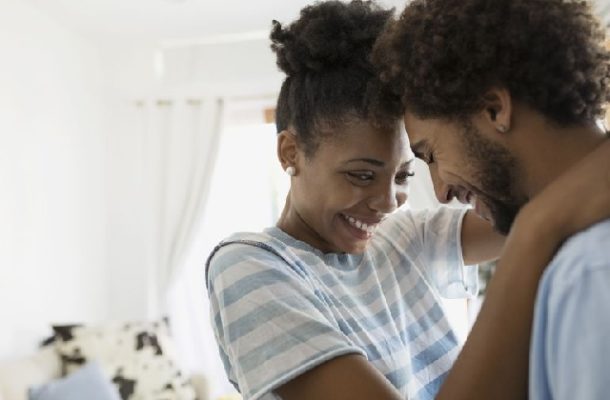 Freud once called female sexuality "the dark continent," and if that's true, then male sexuality might as well be the dark planet.

Because when it comes to sex, men are far from simple. (As much as they may try to convince us otherwise.)

The bedroom is one of the great stages of male performance, so what you see on TV is typically far from what can (and should) be delivered in reality.

That's why sex experts chimed in with more accurate insight about what guys really want you to know when the two of you climb into bed. Here are their top sex tips for women.

It's believed that men are so consumed by libido that they have no self-consciousness surrounding sex. But that couldn't be further from the truth. "[There are] plenty of men who feel very self-conscious about their weight, or parts of their body, and really are affected by this in the bedroom," says Laurie Mintz, Ph.D., author of A Tired Woman’s Guide to Passionate Sex and Becoming Cliterate: Why Orgasm Equality Matters. Many are impacted by performance anxiety too, asking themselves questions like, "Will I be able to get an erection?," "Have I gained too much weight?" and, "Will I be able to please her?"

That's when it can be helpful for him to hear compliments both in and out of the bedroom. Mintz suggests starting outside the bedroom, when you can have what she calls a "kitchen table sex talk" — AKA a lower-stakes time to discuss things that are bothering you in the bedroom without having to be "in the moment" of, well, having sex. That's when your partner can talk about what pressures he's feeling, or what he's self-conscious about. Then, you can boost his confidence.

"In a really good, connected, long-term partnership, there's not a magic word that will work wonders; it's more about getting to know what it is your partner is worried about, and addressing that outside of the bedroom, when he's not already anxious about whatever the issue at hand is."

Once you're in the bedroom (and aware of his insecurities), remind him of how much you enjoy being intimate. For example, if he's worried about his weight, maybe give him a sexy once-over and tell him how how buff he looks naked. Other key areas to compliment: His gut, as men often worry about the size of it (and other measurable parts), and their hair, as guys tend to feel self-conscious once they start losing it.

But not for the reason you think! Studies have shown that boys are more affectionate, even more expressive, than girls until they reach school age. At that time, social repression begins — of words, thoughts, feelings — and the desire for human connection goes underground. So taboo is this desire for intimacy that its possibility can terrify men; not because it's smothering, but because they realize how desperate they are for it.

So what's a woman to do? First, understand that your guy's hasty retreat post-sex may be because he doesn't understand how much he craves a connection with you. Then, it's time for another kitchen table sex talk, Mintz says. "If he's been jumping in the shower right after sex for the last 10 years, he's going to be really taken off guard if, the next time he goes into the shower, you all of a sudden say it upsets you," she explains. "Instead, set aside a time to talk when the situation has passed."

When you do talk, Mintz suggests using the sandwich technique: Give him a compliment, tell him your problem, then follow it up with another compliment. Example: "I really love having sex with you, and after we have sex I feel really close and connected. I know you really want to shower, but I really want to cuddle. Is there a compromise that will work for both of us?"

It can be as simple as asking to cuddle for five minutes before a shower, or even showering together. Regardless of the solution, talking about it may reveal something you never knew, and allows fore more understanding before coming up with a new norm that'll make all parties happy.

3. They appreciate sex for sex.

While intimacy and post-sex cuddling can be wonderful for many men, sometimes a little "throw-me-down sex" is exactly what they want, plain and simple. "Men want their wives to enjoy raw sex, not just endure it or take it personally," says Joe Kort, Ph.D, a psychotherapist and sexologist in Royal Oak, Michigan. "It's not [always] about dominating a woman, but rather ravishing her." On occasion, don't be afraid to let him do just that. (So long as it's something you're comfortable with, of course.)

4. Guys want to be touched.

The penis gets all the press, but men have many erogenous zones, just like women, says psychologist Melodie Schaefer, PsyD. They just don't tell you to move your hands elsewhere because they're afraid that if they do, women will shut down and not touch them at all, she explains. "But there are many places a woman should touch, like the chest, inner thighs, and face," Schaefer adds. Another key move: Gently gripping a man's testicles, as it can be a real turn-on that blends control with release. You can also stimulate the perineum, the area between the scrotum and anus, which heightens pleasure during oral sex.

5. Yes, they have sexual fantasies.

"Men want to share their fantasies but worry their wives will shame or judge them," Dr. Kort says.

Similarly, Dr. Schaefer notes that men wish women would reveal their own sexual imaginings. The solution: Make a game of it.

First (and most important), promise not to judge the other. Then, privately write out scenarios that have tantalized you and place them in a box. Next time you're feeling hot and heavy, pull one out. Either jump right into fulfilling that fantasy or, if you need a little more time to adjust, ask what it is about that fantasy that your partner likes, Dr. Kort says. "Sometimes, its themes can be addressed in different scenarios that feel comfortable for both of you," he adds.

7. And they want you to be honest.

Sex can help ease many stressors in a relationship, but it can also cause stress. If he complains about a lack of sex (or the fact that you're only doing certain things on his birthday), then be honest about what's causing you to withhold.

If you have a normative lack of desire and don’t know about it, Mintz says these kitchen table sex talks are especially important because they can help both of you realize what issues are really at hand without feeling attacked, hurt, or rejected.

Of course, it's also possible that there’s anger, resentment, or deeper issues going on. If that's the case, Mintz says you shouldn't be using sex as a weapon — that's only going to cause more harm in the relationship — and should instead be honest about how you're feeling. If you're not comfortable bringing it up on your own (or discussing it when your partner does), she suggests seeing a therapist, who can help the two of you navigate the issue in a healthy way.

Men like a good quest, so even if you've been together for awhile, allow your partner to court you. "Emotional intimacy is about closeness, but sustaining sexual desire demands a certain amount of distance," Dr. Kort says.

How do couples strike this tricky balance? By allowing each partner to have what he calls "separate sexuality," or a sex life that doesn't include (or betray) the other. "For him, that might mean allowing his wife to use sex toys or letting other men look at her," Dr. Kort says.

"For her, it might be permitting him to watch pornography in order to experience a fantasy." Such indulgences help maintain the balance of desire and devotion for both parties, so talk to your partner outside of the bedroom and see if this is something one (or both of you) might be interested in.

9. Speaking of pornography, it isn't always a big deal.

Finding a spouse using pornography is a top reason couples seek counsel, but it shouldn't be overreacted to or pathologized, Dr. Kort says. First of all, sex addicts only represent 3-6% of the population, so it's unlikely your man is one. Plus, because childhood experiences influence sexuality as an adult, people are very idiosyncratic about what turns them on, Dr. Kort says. "So no woman can, nor should be, everything to a man."

Still, it's tough not to take it personally when he's getting off by looking at another woman. To help tamper that, Dr. Kort recommends taking the secrecy out of pornography and discussing it. "Ask him what about it turns him on, and [express without anger] what turns you off," he says. That way, a dialogue is created that allows for honesty, dignity, and closeness without him feeling like he's doing something shameful, while you can figure out what you're OK with accepting and what you're not.

Guys are often accused of being sexually insatiable, but women should rethink this line of thought. "Men see sex as a celebration," Dr. Schaefer says. "They wish women would take more of a 'carpe diem' approach to it."

We all move through life at the speed of sound, with multiple challenges and pressures. That makes it easy to allow demands on our time and energy to rob us of the joy, pleasure, and opportunity that sex affords us. And more often than not, sex ends up being at the bottom of a long list of priorities. But viewing sex through a different lens — something you want to do versus have to do — can make all the difference.

Plus, there are health benefits to sex. Orgasms release oxytocin, for example, a hormone that's nicknamed the "bonding hormone" for its ability to bring couples closer together while also alleviating stress, reducing blood pressure, and promoting healing. And who couldn't use more of that?