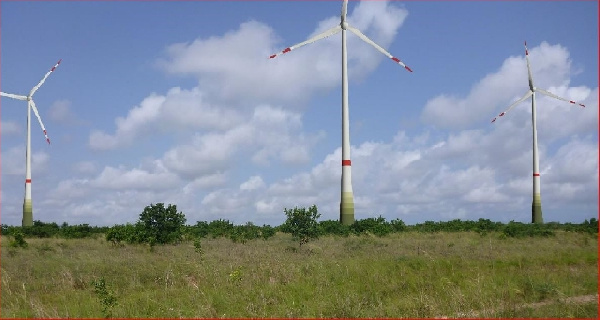 On March 2, 2017, Finance Minister Ken Ofori-Atta presented the Budget Statement and Economic Policy of the government to Parliament and secured approval.

Page 102, paragraph 468 of the document highlighted the need to shift Ghana’s energy sources to renewables.

Captured in the document, Mr Ofori-Atta stated: “In 2017, the Ministry will assist Bui Power Authority (BPA) to complete the design process for the 50MW Solar Hybrid Project, monitor the progress of all Independent Power Producer (IPP) initiatives by ECG, facilitate the planning and development of the 150MW Ayitepa Wind Project and achieve 2-3 percent Renewable Energy Technology (RET) penetration in the generation mix.”

But three years on, Mr Ofori-Atta is preparing to deliver the Mid-Year Budget Review for 2020, and this target has been missed-sourly.

Energy from this Ayitepa wind project has been offered to ECG at a selling price of US Cents 8.9 per kilowatt hour considered the cheapest any power producer could provide in Ghana.

Besides, wind energy is renewable and environmentally friendly compared to others produced using fossil fuels.

The two-phased $450m Ayitepa Wind Project project was expected to be implemented in 2018.

Investors have sunk millions into the project, but no power has been generated.

They have planned to build a total of five large-scale wind energy projects with a total capacity of around 1,000 MW to be located in Greater Accra .

Swiss-based company, NEK Umwelttechnik AG together with its affiliated company Upwind International AG are spearheading the development of the projects.

“This is absolutely frustrating for us; it is frustrating for the investors because the money for the constructions is ready…If I compare Ghana to other countries (in Africa), I am really disappointed about how unprofessionally the government manages the permit processes for such a project,” he lamented.

A similar project in Senegal has already taken off and is operational.

Also unsatisfied by the lack of commitment by the government is the Executive Director of the Institute for Energy Studies (IES), Nana Amoasi VII.

“One cannot understand. What is the challenge? We don’t want to speculate, but it is important that the government make do of its words,” he stated. "If we fail to start a project like this, then we are failing to take advantage of the cost-benefit, and then Ghanaians should be expecting higher to pay higher…the right time to begin is now”.

Ghana could be losing out on an opportunity to meet the needs of over 150,000 Ghanaian households as energy calculations for the Wind Farm Ayitepa show that it can supply between 600 - 700 Gigawatt hours per year.

Residents of the communities where the farms will be located have expressed worry about the other benefits they stand to gain if the project is implemented.

The chief of Mangotsonya, Nene Tetteh Agmleh II, also a member of the Ningo Transitional Council committee tasked to oversee the implementation of the project, is worried about the delays.

The Assembly Member for Ayitepa/Mangotsonya Electoral Area, Mishael Nartey said over 600 Ghanaians would have benefitted from employment in the project.

Meanwhile, District Chief Executive of the Ningo-Prampram Assembly, Jonathan Teye-Doku indicated that he has sanctioned all the permits needed from the Assembly knowing the gains of the wind power project to the communities.

However, the only hurdle is ministerial approval.

"We have written specifically to the Ministry of Energy, and I think the Energy Commission that despite the fact that there has been a freeze on power purchase agreements, NEK and Upwind Ayitepa could be given special dispensation," Mr Teye-Doku stated. "I will advocate that the licenses should be given to them, but at the end of the day, the decision lies with Cabinet."

The community, which has granted more than 15,000 acres of lands for the wind farm cannot also benefit from the irrigation dam, schools, scholarships and other benefits associated with the project.

Ghana’s energy mix was mainly hydroelectric power. Thermal generation units have taken over as the major source of power. Gas plants and solar are also part of the energy mix, albeit to a much lesser extent.

Addition of windmills would have made Ghana a leading giant in Africa with this emerging technology.

The country has optimal spots for harnessing the wind to generate excess power for export to Togo, Benin, Burkina Faso and other neighbouring countries.

The project appears to have been stalled, and the CEO of NEK Umwelttechnik AG explains why.

According to him, the Ghana government says “we now have overcapacity in our country, so we do not need you to also contribute to the oversupply even if you are cheaper and therefore you have to wait.”

This came to light on a media tour as journalists visited some of the sites for the projects.

Besides Ayitepa, there was also the $400m Wind Farm Konikablo project.

On a 9,000-acre arable land located 60 kilometres east of Accra, south of the Aflao road in the vicinity of Sege in the Greater Accra Regions sits a huge meteorological mast with solar panels and gadgets installed.

It is part of the Wind Farm Konikablo project, initiated in 2014.

This is expected to have up to 60 wind turbines and a planned capacity of 200 MW, one of the biggest parks in the whole African continent.

Standing by it is the Project Manager, Jasmine K. Appiah and a team of Ghanaian engineers who are disappointed by the delays.

Also present is the Executive Director of the Institute for Energy Studies (IES), Nana Amoasi VII and his team.

On the mast is fitted with gadgets which she said are for carrying out comprehensive wind measurements.

The area has a wind speed of approximately 6.4 -6.9 m/sec, which makes it one of the best-suited locations for wind farms to generate power for local consumption and export.

Electricity would be produced with wind turbines of the manufacturer ENERCON GmbH and then fed into the National Interconnected Transmission System of the Ghana Grid Company (GRIDCo).

Once operational, the Konikablo Wind Farm will supply more than 550,000 MWh of clean, affordable and reliable electrical energy per year - without the need of any fuel.

Various permits have been secured from the Environmental Protection Agency (EPA), the Energy Commission and the Ningo-Prampram District Assembly.

The only impediment is the government of Ghana, officials of NEK Umwelttechnik AG have indicated.

They said they have had to endure a long seven-year wait and counting because the government is no longer interested in approving the renewable energy project.

NEK has no choice but to take a decision to sell the electricity the Konikablo Wind Farm to bulk consumers and export the cheap power to neighbouring countries, Ms Appiah added.

The projects are Koluedor (160MW), Amlakpo (200MW) and Madavunu (200MW). These three are not as advanced as Konikablo. However, they have also received several permits and authorizations in the meantime.

They are located east of Konikablo between the villages of Sege and Kasseh and spread over vast areas of available land on both sides of the Tema-Aflao road. They will be constructed after Konikablo is online and will then also in phases be connected to the 330 KV grid at Sege, from where the electricity will be exported to countries like Burkina Faso, Togo, Benin and others.

Apart from that, NEK is working on plans related to the installation of “Green Hydrogen Factories” around its project sites.

The European Union has drafted a Green Hydrogen Master-Plan, which -among others consists of plans for countries in Europe to purchase hydrogen from selected countries in Sub-Saharan Africa which are produced with renewable energies.

NEK said it is ready to deal with the government of Ghana to get the approvals for such a combination, meaning that NEK’s wind farms in Ghana can deliver their green electricity to factories in Ghana to produce Green Hydrogen.

If the government is however not interested in such a deal, then the factories will be constructed either in Togo or Benin, the officials indicated.

The Energy Ministry has been contacted for a reaction, but no response has been received yet.