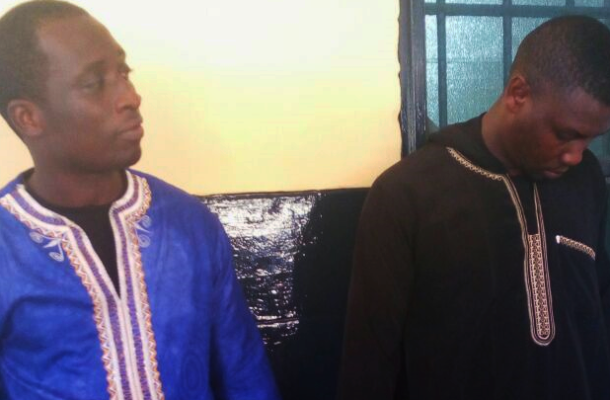 Six persons, including two policemen, have been busted by the Kaneshie Police for engaging in suspected car-snatching deals.

Eight of the cars the suspects allegedly snatched from their owners have been retrieved.Those arrested include Corporal Bismark Ntim, alias Striker, 32, and Lance Corporal Francis Opoku Gyau, 29, both attached to the Accra Regional Police SWAT Unit.

A seventh suspect who is currently on the run and is believed to be the leader of the gang has been identified as Erasmus Adama Nketia, alias Alhaji.

Even though information available to the police indicates that Nketia is an official of the BNI, the police said they had written officially to the BNI and were yet to get a confirmation.

The suspects are said to hire the services of taxis, mostly from Kumasi in the Ashanti Region, Swedru in the Central Region and other parts of the country, to Accra, where the cars are snatched.

Some of the taxis which were retrieved had been re-sprayed and sold in Cape Coast in the Central Region.

Briefing journalists on the crackdown which the police described as a significant achievement in the fight against car hijacking, the Accra Regional Police Commander, Assistant Commissioner of Police (ACP) Mr Timothy Yoosa Bonga, said it was suspected that many people had fallen victim to the syndicate, whose perpetrators had been evasive with the police for some time.

On the modus operandi of the gang, he said one of the suspects hired the services of a taxi driver from outside Accra to a destination in Accra.

While in Accra, he said, some members of the gang would accuse the passenger, who is one of them, of committing a crime and being wanted by the police.

The driver would then be accused of being an accomplice, leading to the arrest of the two.

After arresting them, the gang would take the ignition key of the vehicle and the mobile phone and money from the accused persons.

They then take the two persons in a different car and abandon the driver at a point, without giving him back the ignition keys, his money and mobile phone.

He said the syndicate was uncovered after they snatched a taxi from a driver at the Cocoa Clinic, near Kaneshie in Accra, after the driver had been hired for four hours from Swedru. The other four suspects

On arrival in Accra about 8:30 p.m., Donkor is said to have asked the driver to take him to the Cocoa Clinic where he claimed his boss would pay the fare.

However, at the Cocoa Clinic, Mr Bonga said, before the driver could park his Kia Picanto, another car, a Nissan Almera, occupied by Ntim, Gyau and Nketia, suddenly crossed the taxi.

When the three persons in the Almera got down, they were said to have pointed fingers at Donkor and claimed he was the man they were looking for.

They are said to have handcuffed the taxi driver, together with Donkor, and pushed them into the Nissan Almera, while the taxi was left behind.

Mr Bonga said the suspects took mobile phones and money from the two persons they had allegedly arrested and the ignition key from the taxi driver.

He said the taxi driver told the police that he was made to lie on the back seat, while Ntim and Gyau, who were in police trousers and mufti tops, sat on him.

While the car headed towards an unknown location,  the suspects stopped and pretended to be interrogating the taxi driver, after which they abandoned him to his fate.

He said the driver managed to find his way to the Cocoa Clinic with the help of a Good Samaritan, only to find that his car was gone.

Mr Bonga said the victim lodged a complaint with the Kaneshie Police.

He said just as investigations were ongoing, a new complaint was received from another victim at the North Industrial Area in Accra.

Through investigations, he said, the police succeeded in arresting Donkor, who mentioned Ntim, Gyau and Nketia as his accomplices.

They also led the police to arrest the other suspects in Cape Coast, whom they claimed were the buyers of the stolen vehicles.

According to the police, the suspects changed the colour of the cars by re-spraying them and acquiring new number plates and fake documents to cover the cars before re-selling them.