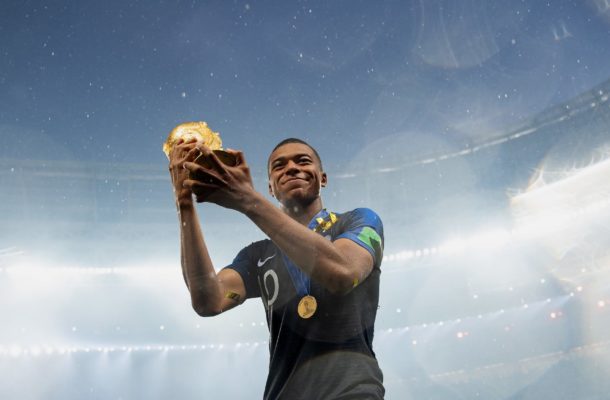 Kylian Mbappe: All by the age of 20


145
million euros is what Paris Saint-Germain paid Monaco for Mbappe – a figure that could and should rise to €180. It made the Clairefontaine alumnus the second-most expensive footballer in history after PSG team-mate Neymar (€222m), and smashed the world-record fee for a teenager Manchester United had paid Monaco for Anthony Martial (€49.3m).


60
years had passed until a teenager scored multiple goals in a FIFA World Cup™ match until Kylian Mbappe turned Argentinian hangman at Russia 2018 to become the fifth to achieve the feat after Mexico’s Manuel Rosas in 1930, Germany’s Edmund Conen in 1934, and Brazil pair Jose Altafini and Pele in 1958. The France No10 netted, in four minutes in the Round of 16, more goals than any teenager had registered in an entire World Cup since England’s Michael Owen in 1998 (two goals in four games).

32
goals in all competitions for Monaco and Paris Saint-Germain is what Mbappe scored in 2017 – an all-time record for a teenager based in one of Europe’s top five leagues. The holder of the distinction had been Owen, for his 29 goals for Liverpool in 1998.


18
years and 95 days was the age at which Mbappe became the second-youngest post-war player to represent France. Maryan Wisniewski, who starred alongside Raymond Kopa and Just Fontaine at Sweden 1958, was 34 days younger in 1955. Legendary Bleus Michel Platini and Zinedine Zidane were 20 and 22 respectively when they made their international debuts.


16
years and 347 days was the age at which Mbappe became Monaco’s youngest-ever player. The supersonic attacker then became, at 17 years and 62 days, the principality club’s youngest-ever marksman. Mbappe robbed both records from Thierry Henry.

13
goals in the UEFA Champions League is what Mbappe scored as a teenager – almost doubling the previous record. Patrick Kluivert hit seven for Ajax before turning 20, including the winner, as an 18-year-old, against AC Milan in the 1995 final. Raul and Karim Benzema hit six apiece as teenagers.


10
international goals is what Mbappe scored in his teens – the joint-third highest in history. Only Pele (26) and Harald Nielsen (15) managed more, with Imre Schlosser and Wayne Rooney registering the same. They are followed by Wlodek Lubanski (9), Paul van Himst (9), Christian Pulisic (9), Diego Maradona (8) and Cristiano Ronaldo (7).


3
teenagers have played in the World Cup Final after Mbappe emulated Pele in 1958 and Giuseppe Bergomi in 1982. The Best Young Player Award recipient then became the second player to score in the fixture after the Brazilian. Mbappe’s goal against Croatia was from 25 yards – the longest distance from which a teenager has netted in a World Cup match.


2
sportspeople made TIME magazine’s list of the 25 most influential teenagers in the world for 2018: Mbappe and snowboarding phenom Chloe Kim, who won Olympic gold as a 17-year-old earlier this year.