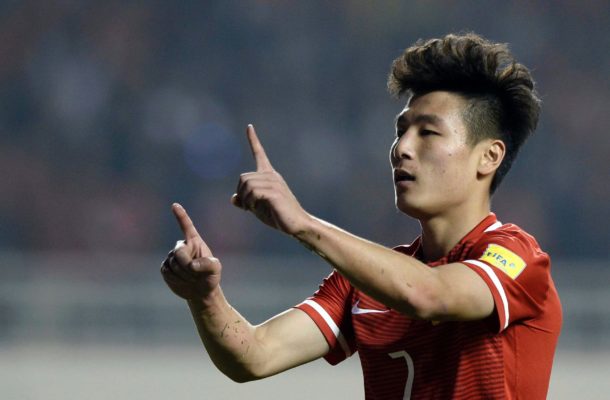 Chinese fans have spent an age waiting for a proven goalscorer of their own. A look at the list of top marksmen in the Chinese Super League bears this out, with domestic strikers generally struggling to compete with dominant imported stars.

The emergence of Wu Lei, however, has ended this long wait for a homegrown goal hero. The ever-improving China PR and Shanghai SIPG forward hit new heights over the past season, scoring 27 times to finish as the Chinese Super League's top scorer - the first Chinese player to claim this position since Li Jinyu in 2007. That impressive haul also helped his club clinch their first league title.

"To be honest, I didn't perform badly last season," the 27-year-old, who picked up both the Super League’s golden boot and golden ball awards, told FIFA.com. "It was a memorable season. I was in good form and scored regularly.”

Even more significant was that he achieved this feat amid an ever-growing list of star foreigners playing in the Super League. "In recent years more and more foreign star-players have moved to Chinese clubs,” he acknowledged. “They have played with big clubs in Europe and some of them played in the World Cup with their national teams, so the competition for the top-scorer prize was fierce. I'm happy to have won the race this season."

With lightning pace and a sharp goalscoring instincts, Wu has long been hailed as a talented predator. He exploded on to the local scene in 2012, when he scored 16 times to help Shanghai earn promotion to the top flight. The next year saw him make more waves in his debut Super League season, when he finished among the division’s top three marksmen.

That progress has continued in the time since, and after finishing second in the top-scorer race in 2016 and 2017, his dedication to pursuing the prize has finally paid off. For Wu, the achievement represents the culmination of years of sustained efforts.

"I have been working hard all these years and have gained plenty of experiences and exposure [with both club and country]. At the same time, I have improved in terms of mentality,” he explained. “All these factors combined to contribute to my good performances this season."

With the 2019 AFC Asian Cup just around the corner, Wu is now aiming to translate his club form to the international stage.

“When I played the last Asian Cup as a young player, I was inexperienced and I didn't get myself fully prepared,” he reflected. “This time I am expected to play a key role in the team under coach [Marcello] Lippi. I hope I can maintain my prolific form and score as many goals as possible to help the team do well.”

Since his international debut in 2010, Wu has garnered 12 goals from 57 appearances. Notably, he sealed a 2-0 victory against Qatar on the road to the 2018 FIFA World Cup Russia™, which secured China’s return to Asia’s final qualifying round. And while the team weren’t able to go on to qualify for the global finals, they ended their campaign with plenty of cause for encouragement.

“The experiences of the Russia 2018 qualifiers were important for us,” he said. “For so many years, we had failed to reach the final qualifying round and missed out on the chance of competing against Asia's best. We were not aware of how far we had been left behind.

“But our performances in that final stage proved that we are a team capable of competing against them for a place in the World Cup. It came as a boost to our confidence.

“As for Qatar 2022, we have only one aim: to reach the World Cup. That is the target not only for the entire team but also for every Chinese fan.”